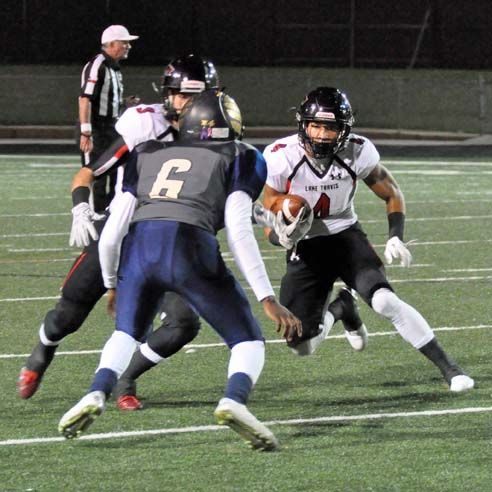 Barkley added two touchdown runs, and Santiago Villegas also scored three times as the Cavaliers raced to a 56-0 lead. Lake Travis scored every time it had the ball in the opening half and rolled up 363 yards offense before the break.

The Cavaliers scored early and often, taking a 35-0 lead after one quarter. Barkley and Villegas alternated scored touchdowns before Charlie Brewer hit Humble to close out the opening quarter. Barkley, Villegas and Funk rushed for 2nd quarter scores.

Villegas led Lake Travis with 76 yards rushing on just nine carries. Brewer completed 12 of 15 passes for 214 yards before heading to the bench in the second quarter.

Akins avoided the shutout when Marcus Jones intercepted a third-quarter pass from Josiah Snowden and returned it 70 yards for a touchdown. Playing without starting quarterback Mike Gonazles, the Eages struggled to move the ball. Backup quarterback Demarcus Cabezas completed seven of 22 passes for 67 yards and rushed for 64 more yards to lead Akins. In all Akins gained just 147 yards on the night.

Lake Travis hosts Pflugerville next Thursday at 7 in the Bi-District playoffs. The Panthers won a three-way coin flip with McNeil and Stony Point to break a tie for fourth place in District 13-6A.