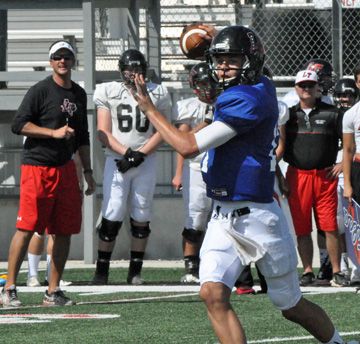 Under new coordinator, Cavs' offense to have a different look

The more things change, the more they stay the same.

At least that’s the hope at Lake Travis, where the Cavaliers just completed a spring where job one was installing new offensive coordinator Mike Wall’s offense. Wall, a Lake Travis assistant from 2007-09, rejoined the staff when David Collins left to become Pine Tree’s head coach. Wall returns to Lake Travis following three years at Georgetown and one at Hebron Christian Academy in Georgia.

Wall is Lake Travis’ fourth offensive coordinator since the Cavaliers started winning championships. His three predecessors embraced and employed a version of the spread offense, and Wall will continue that trend, though his version uses a completely new vocabulary and some exciting twists.

Head coach Hank Carter said change would have taken had Collins remained. He and the former coordinator had already begun talking about tweaks to the system. His departure and Wall’s arrival merely sped up the process.

“We were going to have a change, anyway,” Carter said. “Coach Collins and I had talked about it. We had gotten to the point where we were going to have some terminology overhaul anyway and some [new] things, so with Coach Wall coming in, almost everything is new.”

In an early practice quarterback Dominic DeLira checked with the coaches signaling in a play and moved from where he’d normally take a snap – four yards behind the line in the shotgun – and walked right up to center Garrett Stotts, reached down and started barking out signals.

Safety James Bailey, a two-year starter, couldn’t for the life of him figure out what DeLira had done, or why.

“I remember James saying, ‘Dom was underneath the center. What was that all about?’” said Wall, the mad genius behind the confusion.

Yes, the Cavaliers went under center – seemingly for the first time in more than a decade – and had success running the ball, Wall said with a smile.

“Even though we told those [defensive] guys the day before we were going to be doing some under the center stuff, they had never seen it. They were like, ‘this is Lake Travis and we’re under the center?’” Wall said with a smile.

Cavalier fans should fret not, though. The new formation isn’t likely to become the Cavaliers’ base. Wall played quarterback and still has that quarterback’s mentality.

“We’ve got a great quarterback and some great receivers, so I often get to that mindset where I want to throw it on some critical downs,” he said. “But as you get shorter and you get third and ones and twos, we’ve got to have a great plan for that.”

Wall’s offense espouses much of what he learned as a player at Tulsa and in several coaching stops, including his last at Lake Travis where he learned the hurry-up, no-huddle spread that Chad Morris taught and still uses at Clemson. But he’s added his own twists.

“I kind of morphed [my offense] into a multiple, not just the spread offense but a multiple hurry-up, no-huddle,” Wall explained. “We tried to use one personnel group and we can get into about 15 different formations.”

Defenses, Wall says, generally base their game plan on what they see. A particular personnel grouping usually means a particular formation with a specific set of plays. Defensive coaches use those keys to plan how they’ll stop the offense.

“We take away their ability to say, ‘they’re in this personnel group so here’s what their block of plays are that we are expecting,’” Wall said. “And I think that makes us so much more diverse and gives us an added element. I mean, you’ve got to defend five wide receivers and then in the next formation you have to defend two tight ends and two backs, and it’s the same personnel group.”

Wall’s offensive players – and coaches – have taken to the new system extremely well. As spring wrapped up, he had installed 80 percent of the offense.

“It’s not about how much I can put on them,” Wall said. “It’s about how much can the kids know like the back of their hand and execute to the best of their ability? There’s always that saying: if your mind is moving, your feet are not. So if they are out there thinking about what they have then they’re working slow and they’re not doing it great.”

As spring ended and full practice morphs into the summer 7on7 season, Wall likes the progress the Cavaliers have made.

“We’ve got enough on right now to win football games,” he said. “It doesn’t take a million football plays. It comes down to what do your kids know and know how to execute based on a variety of defensive looks.”