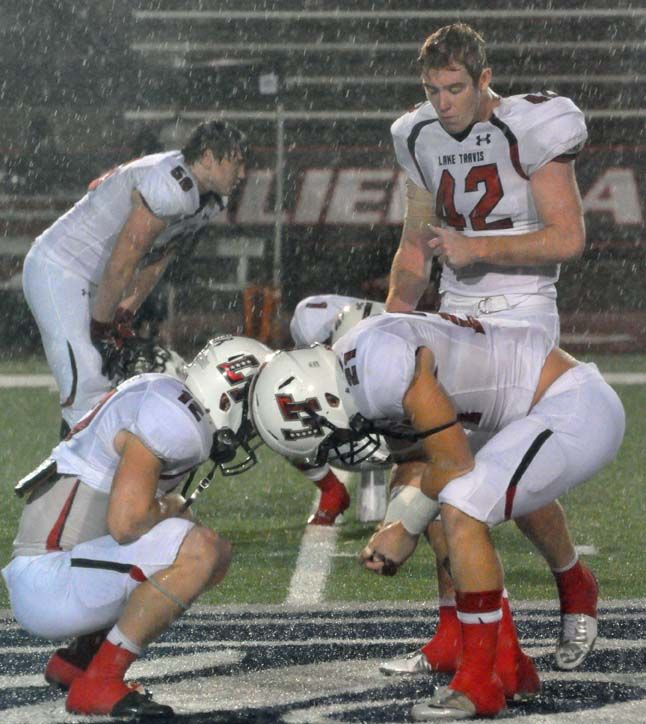 After surviving some second round scares during its run of state championships, Lake Travis finally met its Area round match.

Spring weathered a furious Lake Travis comeback attempt – not to mention the weather – and knocked the Cavaliers out of the playoffs with a 34-28 win at Bryan’s Merrill Green Stadium on Nov. 22.

Lake Travis had chance after chance to steal victory from the jaws of defeat, driving inside Spring’s 20-yard line three times in the fourth quarter only to come away without a point. The Cavaliers ultimately couldn’t overcome four second half turnovers, two of which came on interceptions in the end zone after passes tipped off receiver’s hands.

Spring led 27-15 at the half and took a 34-22 lead into the fourth quarter when Alex Woods hit Cameron Rose for a 23-yard touchdown on fourth down – the Lions’ third fourth down conversion on the night.

Lake Travis cut into the lead when Dominic De Lira connected with Grant Foster for a touchdown midway through the final quarter to pull within 34-28. The Cavalier defense responded by forcing its only turnover of the game, an interception that Chris Roller returned to the Spring 15. But the Cavaliers came away with nothing when Charlie Brewer’s pass tipped off Maleek Barkley’s hands in the end zone to be intercepted by Aaron Robinson.

The Cavalier defense, riddled for 255 yards in the first half, stepped up again, forcing a quick punt, but another scoring chance went by the wayside when Colton Bailey couldn’t snag a long fade from De Lira and tipped the ball to see it intercepted by Willie Sykes with just three minutes left.

A final Spring punt gave the Cavaliers a last possession, starting at the Lions’ 37. De Lira misfired on three consecutive passes and Foster couldn’t make a diving catch on fourth down, but officials gave the Cavaliers new life when they flagged a Lion for targeting to extend the drive.

From Spring’s 22-yard line, offensive coordinator Mike Wall dipped into his bag of tricks. De Lira left his customary shotgun position and approached the line to change the play, and Hunter Rhodes snapped the ball directly to Abe Willows, who pitched it to Kevin Hathaway, a quarterback in the game at receiver. Hathaway fired a pass to De Lira for a 10-yard gain to the 12. De Lira came up hobbled after the tackle but remained in the game, and the Lions’ defense sacked him for a 12-yard loss on the next play, forcing him out of the game.

Brewer re-entered the game and threw a pass that Cade Green couldn’t handle on the sideline. On third down he scrambled for a short gain, setting up a do-or-die fourth down. As Brewer took the snap, Spring’s Tyrek Domio got past his blocker and grabbed Brewer. The sophomore quarterback shook free momentarily, but as he tried to throw toward a receiver, Domio jumped on Brewer’s back and the pass fell harmlessly to the turf well short of any receiver, ending Lake Travis’ season.