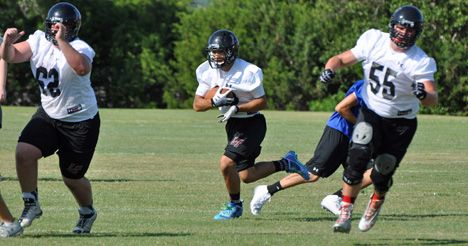 Preview: Youth will be served as Cavs hope to embark on run to Arlington

Every so often, high schools find themselves blessed with a crop of once-in-a-generation athletes.

Lake Travis has been no exception. In the mid-2000s, a class of football players anchored by Gilberts, Brewers, Pollards, Lagasses, Streulings and McCrarys – to name just a few – produced a run of state championships unmatched in Texas history, led by players who started for three seasons. In a sport where key varsity contributors are more than likely juniors and seniors, Lake Travis’ championship teams often featured several sophomore starters.

If coached correctly, those sophomores improve as upperclassmen, and winning becomes contagious. From 2007-2011, no one won more than Lake Travis. But those older Gilberts, Brewers and Streulings have moved on, taking their championship rings and experience with them.

It’s been two seasons since Lake Travis won a state championship, though the Cavaliers came close in 2013, falling to eventual champion Cedar Hill 19-10 in the semifinals, a game that the Cavaliers led in the final quarter. More than a handful of key performers graduated this past spring, leaving the football team with some gaping holes in need of quick fixes.

No problem, says head coach Hank Carter. The next youth movement has arrived and, while it’s too soon to tell if this class develops into a championship caliber class, expectations are high. Some of the names are familiar, if unrelated. There are Brewers and Baileys and Willows and Greens, each looking to make their own mark on the program.

“I think it’s going to be a great season,” Carter said. “We’ve got six and six [starters] back on top of one of the most talented freshman/incoming sophomore classes that we’ve had come through the school. So, we have a lot of talent here. I’m looking forward to it.”

For Lake Travis to have the type of year folks have come to expect, the young players must mature and adjust to varsity speed quickly. Those in the mix – a look at the Cavaliers’ projected depth chart shows sophomores in the plans at receiver, offensive tackle, linebacker, safety and cornerback – can look to a recent trend of juniors and seniors who’ve been multi-year starters.

“We’ve got to rely on our veteran leadership up front, whether it’s [Garrett] Stotts or Jeffrey Gibbs,” explained offensive coordinator Michael Wall last spring. ‘Those guys are solid guys and leaders on our front group and they’ve got to make those other guys better, just like Dom [De Lira] as a quarterback and Grant [Foster] have got to make those young [receivers] better. Those are the guys who have to become our go-to guys.

Offensively, receiver Foster and center Stotts assumed starting roles as sophomores in 2012. Gibbs started on the line as a sophomore last season. Receiver Hudson Fife saw limited action last season as a sophomore, as did freshman Cade Green. All benefitted from the experience and look to play more vital roles this season for Lake Travis’ typically high-scoring offense, where as many as six sophomores figure to contribute.

The youth movement continues on the defense, where another handful of sophomores hope to follow in the footsteps of seniors James Bailey and Feno Pearson, both of whom have started since 2012, their sophomore season. Defensive lineman Tevin Paul played extensively last season as a sophomore, as did cornerback Tanner Bush. Three more sophomores could potentially start or play significantly at linebacker and defensive back.

“We’re doing alright,” said senior linebacker John Brewer, who also made his way into the playing rotation during his sophomore season. “The young guys are learning, and by next week I’m sure we’ll pick up and things will happen a whole lot faster.”

The Cavaliers will have to. Lake Travis doesn’t ease in to the 2014 season. The Cavaliers open with Waco Midway, the school it vanquished for the 2011 4A, Division I title, comes to town for the opener. Then comes a trip to Copperas Cove, another traditional power, before District 14-6A play begins with Hays Consolidated. In a quick of realignment, both Midway and Copperas Cove are in Region II, which means they could potentially meet again in the playoffs.

“That’s okay,” Carter said. “For us to make the run we need to, we need to be able to play teams like Midway and Copperas Cove. Those are great teams for us to play. They are big. They are athletic. They’ve got great traditions. They aren’t going to blink at us. They’re not going to be afraid of us. Nor are we of them. Those are going to be awesome games for us to start our season with. It gives us a great barometer for where we’re at.”

The playoffs are a world away, but they are never far from Carter’s mind. Losing to Cedar Hill last December still haunts him, but next Friday marks Lake Travis’ first step on the road back.

“I’m excited because we’ve got some great kids coming in,” he said. “We’ve got a lot of kids who have been in some battles. We see how close we were last year. This year we need to finish it.”