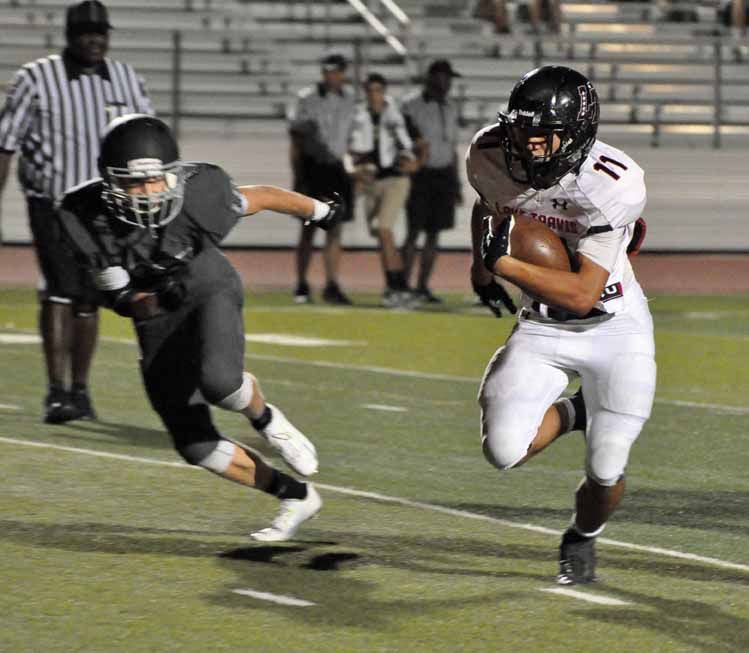 Preview: Offense depending on first-time starters to shine

As with any respectable dynasty, Lake Travis doesn’t so much rebuild its offense following the graduation of star players, it reloads.

For 2014, the Cavaliers hope to accomplish both. First year offensive coordinator Michael Wall has installed a different offense, complete with new formations and vocabulary, from which he hopes a new generation of standouts emerges.

Leading rusher Shaun Nixon and receiver Tyler Payne, who last year combined for 48 touchdowns, have moved on, leaving behind an offense full of promising – if not proven – playmakers. In May, Wall recalled watching video of the previous day’s practice and counting the number of now-sophomores who took regular snaps with the varsity starters.

“We’re young,” Wall said in May. “We’ve got Dom [De Lira] who’s going to be a senior, but we are young in the skill positions. We were watching the film from yesterday’s scrimmage and we had six current freshmen running with the 1s, and we’re moving the ball and doing good things.”

The young bunch will have to adjust to varsity life quickly if Lake Travis wants to accomplish its annual goals – the biggest of which includes a trip to AT&T Stadium in December. After hearing about summer workouts, physical development and 7on7 success, head coach Hank Carter said, despite losing the talented Nixon, Lake Travis still expects to put points on the board.

“Losing Shaun, that guy was a very unique talent and he shouldered a lot of the offense,” Carter said. “Much of it ran through him and he had a great season. He was a huge part of the reason that we made the run that we did. We have some kids coming in.”

Abe Willows may be the most visible of the newcomers. The junior steps into Nixon’s shoes as the primary running back in Wall’s spread offense, and he recognizes the challenge.

“I know that Shaun was one of the best backs ever to come through here,” Willows said. “I’m just going to try and trust my line and do what I can do.”

Bigger than Nixon, Willows will serve as more of a power back than a change-of-direction-breakaway-threat, but Carter said defenses will be hard pressed to catch him from behind as well.

“He’s not Shaun Nixon but he’s going to blaze his own path,” Carter said. “He’s tough. He had a good spring and it was hard for us to get that boy on the ground. Very strong, very fast, very powerful back.”

The coaches knew about Willows’ running ability, but he got their attention with the way he caught the ball over the spring and summer months.

“Coming into high school he wasn’t a natural catcher of the football, but man he had a great summer catching the ball,” Carter said. “There were probably 30 times the coaches would look over at each other and say, ‘Golly I thought they said that guy was having trouble catching it.’ Of course then Abe would come over and say, ‘See, ya’ll didn’t think I could catch.’ He worked on that and it showed.”

Willows will make his varsity debut this season, not because he’s a late bloomer but rather Carter and the coaches felt it better for him to play in junior varsity games than sit behind Nixon on the varsity.

“For any other team in our district, he would have been a varsity running back,” Carter said. “We have the mindset and the philosophy here that we don’t want to put a [young] kid up on the varsity if he’s not going to play a whole bunch. We’d rather keep that kid on the JV and develop the leadership skills and the physical skills because he’s getting to go play.”

Seniors Luke Laney and Ben Lacey will also get snaps at running back.

Grant Foster returns to lead a wet-behind-the-ears receiving corps. With 48 catches over two varsity seasons, Foster has more than twice as many catches than the rest of the varsity receivers have between them. He enters the season healthy after a sprained knee kept him out of four games and slowed him for the remaining 10 last year.

“Grant’s coming back and it’s going to be a different Grant because he wasn’t healthy last year,” Carter said. “He wore a big, old clunky brace that dealt with his knee injury, but he’s healthy now and he’s not feeling any ill effects. He had a very good summer and he’s a playmaker. He’s gritty and he’s not going to blink in a moment of stress.”

Sophomore Cade Green played with the varsity last season and enters the season looking like he belongs. Seniors Jordan Markim and Colton Bailey and junior Hudson Fife are the only other Cavaliers with varsity catches. They’ll be joined in a rotation that includes sophomore Maleek Barkley, who might just make the biggest impact of the bunch.

“He played running back and receiver as a freshman and we have him a role similar to that right now,” Carter said of Barkley. “He’s very strong, with good size, fast and powerful.”

This year’s offense will incorporate a tight-end/H-back, and another underclassmen is battling for playing time there, Carter said. Cade Brewer, another sophomore, gives the Cavaliers an imposing physical presence who’s just as capable blocking as he is lining up wide and running routes in space. Connor Oates, a senior, and Patrick Medina, a junior, are also in the mix.

Wall said integrating a versatile tight end to the usually wide open offense will make Lake Travis more versatile and tougher for opponents to defend, especially because the same personnel group can morph into different formations while maintaining the school’s traditional hurry-up pace.

“We take away [a defense’s] ability to say, ‘they’re in this personnel group so here’s what their block of plays are that we are expecting,’” Wall said. “And I think that makes us so much more diverse and gives us an added element. I mean, you’ve got to defend five wide receivers and then in the next formation you have to defend two tight ends and two backs, and it’s the same personnel group.”

And then there’s the quarterback, who must be the key that ignites the entire offense. De Lira became LT’s fifth consecutive starting quarterback to earn a spot on a Big 12 team after committing to Iowa State over the summer. Carter thinks the senior can, well, live up to the legacy of the traditional Lake Travis quarterback.

“We expect everything to slow down for him even more this year and we expect him to have a great year,” Carter said.

Coming off a junior season where he grew more comfortable in the role, De Lira knows he’ll need to be even more of a leader this season, though he’s not putting extra pressure on himself to make plays.

“I don’t feel too much pressure,” he said. “We might start a little slow, sluggish in the first game, but our goal is always to win state and I firmly believe we can do it again this year.”

Junior Kevin Hathaway gives the Cavaliers another mobile option as one of the backups. Sophomore Charlie Brewer, the latest in a long line of Brewer family quarterbacks, could also factor into the mix. Five of Brewer’s older relatives, from his brother to grandfather, all played quarterback in college.

De Lira also knows that any quarterback must rely on a solid offensive line, and both he and Carter feel the Cavaliers will be more than solid up front.

“Provided that we can stay healthy, I think this group will be the best line we’ve had in a while,” Carter said.

Senior Garrett Stotts returns for his third season as starting center. Junior Jeffrey Gibbs started as a sophomore tackle last season, and senior Aiden Rourke stepped into the lineup against Dallas Jesuit to help lead the way for Nixon’s record-setting 337-yard rushing performance. Another experienced player, senior Hunter Rhodes, moves over from the defensive line to play guard, giving the Cavaliers a quartet of blockers with plenty of experience. Sizable sophomore Brenden Jaimes, who stands 6-foot-5, figures to get the first shot at the other tackle position.

“We just need to play our game and not worry about what [the other teams] are doing,” Stotts said. “We need to worry about us. We just have to stay positive with each other and do our job right.”

Over the last decade, the Cavaliers have averaged better than 40 points per game. The promising youth movement will need to adjust quickly to larger roles or the lights of Friday night for that to continue.