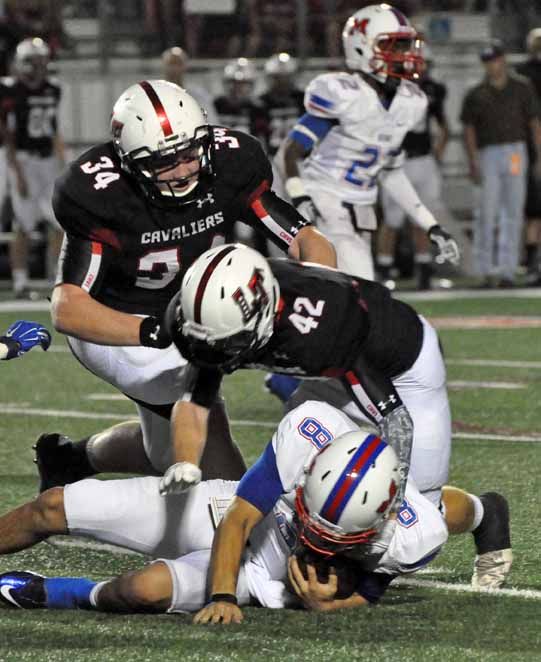 Lake Travis defense must regroup, and quick, for video-game like Cove offense

Out of the fire, into the frying pan.

Lake Travis continues its tour of the upper echelon of District 12-6A Friday night with a trip to Copperas Cove. Experts think the Bulldawgs will challenge Waco Midway for that district championship as the season progresses. As the Panthers did last week, the Dawgs will pose an interesting challenge for the Cavaliers.

“I think Copperas Cove is an excellent team,” Lake Travis coach Hank Carter said Tuesday. “It will be another big test for us.”

Though pleased in spots, Carter said Lake Travis ultimately failed last week’s test with Midway. Despite playing a plethora of youngsters in key positions on offense – Colton Bailey was the only senior who played extensive reps a skill player – the Cavaliers scored 30 points, more than enough to win, Carter thought.

“But our defense wasn’t ready to play and I take full responsibility for that,” he said. “We had too many mental mistakes, and we’re not good enough – no one is – to overcome that. And that’s on me because I’m a defensive guy and I need to have them ready.”

Lake Travis must prepare for a Cove offense that torched A&M Consolidated 62-38, running through and passing over the Tigers for 850 – yes, 850 – yards of offense. Manny Harris, the leading returning passer in 6A, completed 30 of 43 passes for 486 yards and four scores. He added 83 yards and a fifth touchdown on the ground. Trent Canion and LaDerian Johnson combined to rush for 218 yards on 33 carries. Derris Prater and Tre Powell combined to make 20 catches for 363 yards.

“They are very talented,” Carter said. “They executed really well against Consolidated. Offensively they had their way with them.”

Carter remains confident in Lake Travis’ defense despite last week’s struggles, which he said extended past the players to the coaches as well.

“Defensively, we knew what was happening when it happened,” he said of his team’s challenges against Midway. “We had communication errors. We didn’t get aligned properly. Sometimes that was due to not making the right adjustments and sometimes we didn’t line up quickly enough. There were a few times where they [used a quick tempo], and [as coaches] there were times we needed to do a better job getting the play in and getting us lined up.”

All of those problems, Carter said, have been addressed. Lake Travis’ inexperienced cornerbacks – first time starters senior D’Marcus Lacy and sophomore Aaron Brown-Nixon – have a week of live action under their belts. Even for seniors James Bailey and John Brewer, Midway marked the first time they had played free safety and rover, respectively, as varsity players. However steep, there’s still a learning curve.

“But that was our first game,” Carter said. “We had a lot of guys learning new positions and that showed. Even though James [Bailey] has started [for two seasons], that was his first time at free safety. John [Brewer] has played a lot of games on varsity and that was his first at rover. Secondary is probably where we were least experienced Friday, and I think we’ll look a lot different in that regard and we’ll be in better shape.”

Lake Travis’ secondary figures to get a boost with the return of senior strong safety Chris Roller, who was one of the Cavaliers who missed the preseason scrimmage and Midway game due to an off-field situation. If anything, Roller can make calls and communicate with the other defensive backs from his strong safety spot.

“I know that our communication will improve in the secondary,” Carter said without mentioning Roller specifically. “No question about that. I know that we’re going to play better.”

As prolific as Cove’s offense was against Consolidated, its defense yielded 452 yards, much of it through the air, and 38 points. Consol scored on three long passing plays, something Lake Travis might take advantage of. Though the Cavaliers didn’t have many big plays, sophomore receiver Maleek Barkley had two of them en route to a six-catch, 109-yard night.

Running back Abe Willows also went over the 100-yard mark receiving as sophomore quarterback Charlie Brewer passed for 306 yards. Brewer will start again as senior Dominic De Lira remains sidelined due to an off-field situation. While he is practicing with the team, De Lira has not attended the scrimmage at Vandegrift or the opener with Midway. Kevin Hathaway, who finished the game when Brewer left with calf cramps on the final drive, may also take snaps.

“What we’re looking for out of all those kids – Charlie and the rest of them – is to make some strides and take a big jump here,” Carter said. “Let’s make sure our decisions are good, fast decisions and the ball is going where it needs to go. We don’t want to make the same mistakes we made last week.”

“That’s the same for everybody,” he said. “We just want everybody make a jump, let’s get better. And I know we will. All parties involved.”