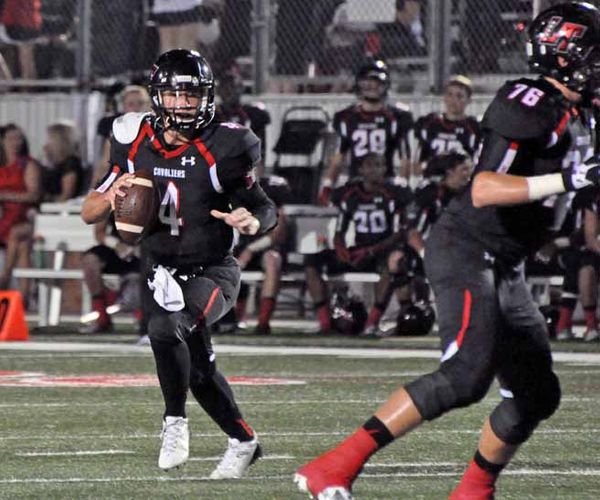 He wasn’t perfect and he wasn’t particularly sharp, but Lake Travis senior quarterback Dominic De Lira made the most of his return to the lineup Friday night against Del Valle, leading his team to a 55-0 win on Homecoming.

De Lira, who missed the first three games after an off-field incident, threw two touchdown passes, ran for a third and caught a fourth as he settled back into the lineup.

“Tonight went really well,” De Lira said after the game. “We started off a little slow. I was jittery at first.”

The Cavaliers leaned on junior running back Abe Willows while De Lira settled back in. Willows went 57 yards for a touchdown on the game’s first play and never looked back, rushing for 232 yards on 17 carries. He also scored just before halftime as Lake Travis built a 34-0 lead.

After halftime, De Lira completed five of seven passes for 50 yards and a score. He also caught a 1-yard pass from Hudson Fife for a score. He left after his 24-yard touchdown pass to Cade Green gave the Cavaliers a 48-0 lead with 3:23 left in the third quarter.

“I felt like as soon as we came back onto the field for halftime, I felt like it was midseason and I had been playing all along,” De Lira said. “It feels pretty good.”

De Lira overcame his jittery start to complete 14 of 26 passes without an interception for 164 yards and two scores. He rushed four times for 39 yards and a score and caught the short scoring pass. He did miss chances to connect with Green and Grant Foster on first half scores, something coaches attribute to rust.

“The game went probably how we thought it would,” head coach Hank Carter said on Monday. “It’s going to take Dom some time to get in there and become more comfortable. I think that after the first quarter he really settled down and looked… It’s been a while since he played.”

Despite the rust and some missed chances, Lake Travis gained a season-high 571 yards and didn’t punt until its final possession.

“Overall, I’m very pleased,” Carter said immediately following the game Friday night. “By and large, from what I was hearing on the headsets, the ball was going where it was supposed to go. We had a couple of drops tonight and we need to clean that up, but heck, it’s hard to complain about a 55-0 win.”

Carter said the Cavaliers didn’t play as quickly as he’d like, but part of that he put on sluggishness off the bye week.

“We didn’t play as fast as we wanted to,” he said. “I think several things attributed to that. One, it was Dom’s first time back in there. Coming off the bye week, we were just sluggish at times.”

De Lira agreed with the coach’s assessment and was eager to get back to the grind to improve.

“Tonight was kind of a foundation for the rest of the season,” he said. “Now I need to concentrate on improving every single week. Coach [Michael] Wall does a great job coaching the offense. Coach Carter does too.”

Charlie Brewer, the sophomore who started the first three games in De Lira’s absence, came on late in the third quarter. He completed four of six passes for 69 yards, including a 43-yarder to Cade Brewer that set up Luke Laney’s 1-yard touchdown to close the scoring.

While sidelined, De Lira said Friday nights became excruciating to get through. Knowing he wouldn’t be on the sidelines with his teammates, he settled for listening to Mark Hoenig and Bucky Godbolt’s call of the action on the radio.

“It was hard missing those games,” he said. “I had some emotional days. It made me a lot stronger. I would sit there and listen to the whole game on the radio, mostly by myself but sometimes with my brother.”

Restored to the lineup, De Lira won’t have to listen to his teammates play anymore. His senior season has finally begun, and De Lira once again feels like one of the guys.

“It feels really good,” he said. “All of the guys, the coaches, my teammates, they were always there for me. Tonight, I was a brother again.”