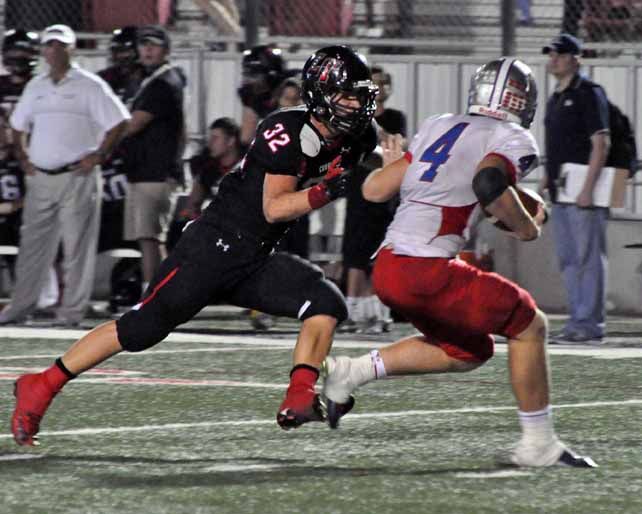 Lake Travis used a virtuoso performance from its defense along with some crucial catches by seldom-targeted tight ends to beat Westlake for the seventh consecutive time Friday night, 24-7.

The Cavaliers smothered Westlake’s offense by unleashing a sack attack on Chaps quarterback Sam Ehlinger. Lake Travis sacked the Westlake sophomore 11 times, including on six consecutive passing plays in the second half, to keep the Chaps grounded.

“I don’t think [I’ve seen that before],” said Lake Travis defensive end Garrett Womack, one of the Cavaliers’ sack masters. “It feels good.”

Womack, Jason York, Feno Pearson, James Bailey, John Brewer and Sammy Ochoa all got their hands on Ehlinger at different points in the game.

“Our game plan was to keep the ball in front of us, and that sounds elementary,” Lake Travis head coach Hank Carter said. “But they throw the deep ball so well, so we were trying to collision the receivers underneath to give our pass rush time to get there.”

Ehlinger finished the game with 21 rushes for negative 32 yards after gaining 27 on his first five carries. He also completed just 12 of 26 passes for 139 yards, all season lows. The Chaps managed just 144 yards of total offense against Lake Travis’ defense.

Not to be outdone, Westlake’s defense smothered Lake Travis’ rushing attack, especially early, while nursing a 7-3 lead late in the first half. But a pair of catches by tight end Connor Oates helped set up a scoring pass from Dominic De Lira to Colton Bailey, giving the Cavaliers a 10-7 halftime lead.

The lead grew in the second half as De Lira found his groove. He completed 10 straight passes in the third and fourth quarters for 139 yards and a 25-yard touchdown to Maleek Barkley. Mixed in among the completions were four to tight end Patrick Medina, including one that set up Barkley’s score. Medina and Oates combined to catch six passes for 106 yards.

“It just came down to our quarterback making some big time-passes, scrambling and getting the ball to us when he needed to,” Medina said. “It was all about Dom coming through.”

De Lira’s scrambled and found Oates down the center of the field for 36 yards to set up his touchdown pass to bailey, which came after another cross-field scramble. Medina’s four catches came after halftime as De Lira found his groove.

“For a while, scramble drill was our best thing going,” Carter said. “Dom made some great plays with his feet and he popped a couple of balls.”

After throwing an interception early that set up Westlake’s touchdown, De Lira settled in with Iowa State offensive coordinator Mark Mangino watching from the Lake Travis sideline. He finished the game 21 of 31 for 228 yards and two scores. He added a five-yard rushing touchdown and left the field with a huge smile. The quarterback’s smile put one on his coach’s face as well.

“He’s been through a lot,” Carter said of his quarterback. “It’s not easy to coach at Lake Travis or play quarterback at Lake Travis. We’re not asking anybody to feel sorry for us because we’ve got it pretty good, but there’s a lot of pressure that comes with that. And he also had his future college coach here. He played well and made a lot of plays.”