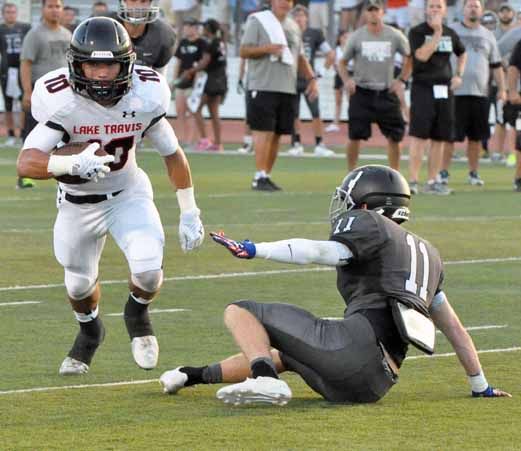 For football coaches, the season opener always brings an equal sense of excitement and uncertainty. At Lake Travis, Friday’s opener against Waco Midway features plenty of both.

The match-up should be one of the more exciting ones, featuring two teams picked to win their respective districts who last met for the 4A, Division I state championship in 2011. Lake Travis, though, may be dealing with more uncertainty than which new faces will step in to replace graduated seniors.

A number of projected starters did not play in last Friday’s scrimmage against Vandegrift, most notably quarterback Dominic De Lira. On Monday, Lake Travis coach Hank Carter, who’s also the district athletic director, would not talk specifically about players who missed the scrimmage and why or whether they’d be available for Friday’s opener.

“The athletic department and myself made a decision that those players would not participate in the scrimmage due to a circumstance that happened off the field that I cannot talk about,” Carter said.

The depth chart he released to the media ahead of the game with Midway, however, lists all expected starters, including De Lira, though that doesn’t guarantee everyone listed will play.

In Friday’s scrimmage, sophomore Charlie Brewer and junior Kevin Hathaway split time at quarterback. Carter liked the way both ran the offense against Vandegrift given the number of players who didn’t play.

“I thought both of the quarterbacks played well,” he said. “We did some typical scrimmage stuff, but I also think in general we played pretty sharp, especially when you consider that we had a lot of guys not there.”

In early practices and intersquad scrimmages, Brewer and Hathaway have taken significant reps with the first team offense while De Lira has taken reps running the scout team against the starting defense. Friday’s opener with Midway takes on a bit different of a look if De Lira, and others who missed the scrimmage, won’t be available.

The Panthers reached the 5A, Division II, Region I Area playoffs last year and return their quarterback, top rusher and top receiver. Ben Hicks passed for 3,741 yards and 36 scores last year. Devontre Stricklin, a tall and speedy Baylor-bound receiver, had 46 catches for 1,023 yards and 14 scores. He gives the Panthers a home-run threat. Eric Clayburn led the rushing attack with 818 yards and 11 scores.

“They are talented, a very good football team with lots of weapons,” Carter said.

The teams last met in 2011 as 4A, Division I championship combatants. Lake Travis prevailed 22-7, and while the Panthers run similar schemes this year, that’s about all that can be gleaned from the first meeting. If anything, Carter said, this Midway team is much more settled at quarterback. Hicks, a Houston commit, can do it all.

“The kid they have now, he’s an excellent passer,” Carter said. “He can run a little bit too, but they throw the ball much more effectively now than they did in 2011. That’s scary. Any time you can throw the ball and have guys on the outside like they do, it’s tough.”

Lake Travis senior defensive end Feno Pearson said he welcomes the challenge of playing Hicks, who figures to be one of the state’s top passers.

When Carter and Midway coach Terry Gambill scheduled the game in the spring, they knew they’d be providing each other with a stern test.

Even if the test beomes a little sterner if the Cavaliers aren’t at full strength.