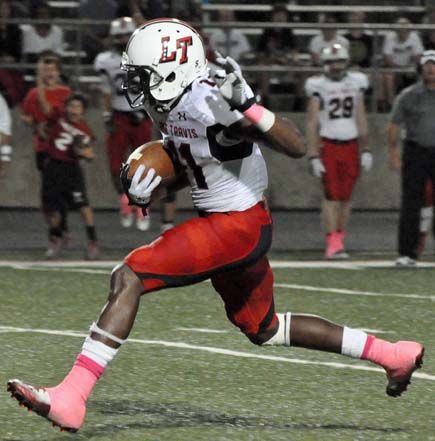 Cavs aim to keep momentum in finale vs Akins

With its first goal accomplished, Lake Travis closes out the regular season Friday against Akins before giving its full attention to the post-season.

The Cavaliers wrapped up the District 14-6A title with a 64-7 drubbing of Bowie on Halloween at Burger Stadium. The district crown is Lake Travis’ fourth in a row and tenth in 11 seasons dating back to 2004. Cedar Park beat Lake Travis for the District 25-4A title in 2010, but the Cavaliers laughed last beating the Timberwolves in the Region IV title game en route to their fourth consecutive 4A state championship.

“It feels pretty good,” senior receiver Colton Bailey said of the district title. “We played a couple of good teams and had a couple of good games along the way. We played well. We grew closer together as a team. That helped a lot, especially against Bowie.”

Against a Bowie team that had allowed only two opponents to score more than 20 points, the Cavaliers erupted for 37 in the first half, 64 when the dust settled.

“The offense I think scored on five of their first six or six of their first seven possessions,” Carter said. “They did really well. I’m proud of them. It was a good night. We’re playing at our best and that’s what we want right now.”

“I think there’s always more you can accomplish, but I think we are definitely coming together offensively at the right time,” Bailey said. “We need to keep working hard at practice, keep studying film.”

Carter and Bailey both said the Cavaliers must take care of their final bit of regular season business Friday night against Akins, which comes to Lake Travis winless in district play. Despite that record, the Cavaliers don’t plan on overlooking the Eagles.

“As of right now, the whole team and the coaching staff is looking at Akins,” Bailey said. “I think we’ll be fine. We just have to keep our mental focus and do what we need to do to come out of it with the win.”

Carter understands many will expect the Cavaliers to look past the Eagles, but he won’t let that happen. The Eagles may have lost all of their district games, but four of the losses have been by a single touchdown. Akins struggles offensively, averaging less than 270 yards per game. By contrast, the Cavaliers average better than 450 yards per game.

“We are planning for Friday night just like we did for [Bowie] last Friday night,” Carter said Tuesday. “We do understand that this game doesn’t have a great deal of bearing on playoff seeding. We’re going to go out and get a win, that’s our plan.”

Lake Travis owns 59-14 and 58-28 wins over Akins and could be looking at a similar story if things go according to plan Friday. That would allow the Cavaliers to get starters out of the game early and lessen the risk for injury leading up to the playoffs.

“For the most part we want our guys to play in a competitive environment as long as needed,” Carter said. “We’re going to see the flow of the game and make decisions on that.”

With the district championship in hand, there’s still plenty to play for.

“I can tell you that our kids are excited about Friday night,” Carter said. “It’s player recognition and parent night and probably the last time our seniors play a home game here. Outside of that, our kids are looking forward to getting a win against Akins and getting ready for the playoffs.”

The ultimate Cavalier goal Friday will be to maintain the momentum that comes with eight straight wins.

“They are excited,” Carter said of his Cavaliers. “They are enjoying the time they are spending together and with their coaches. Our team feels very close right now and I think the boys are having fun. It’s also rewarding to see their hard work, dedication and time investment be rewarded by how they go out and play on the field. In the last two weeks, we’ve done that. Hopefully we can keep that going.”