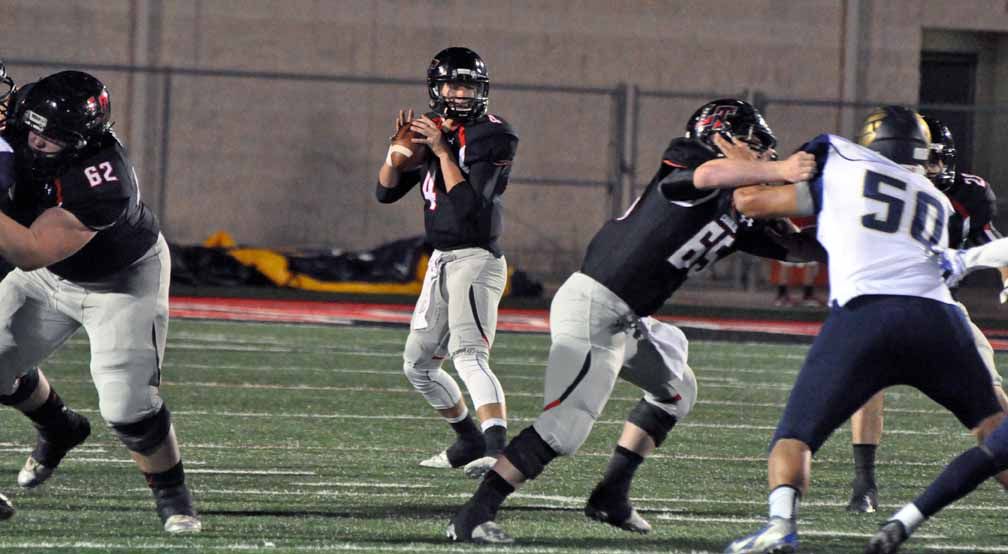 Throughout Lake Travis’ run of 4A state championships, the second playoff game often provided the Cavaliers with their toughest test this side of the championship game.

In 2008 and 2009, the Cavaliers had to overcome halftime deficits to beat a Cibolo Steele team that would go on to win the 5A, Division 2 title in 2010. Lake Travis outlasted Johnny Manziell’s Kerrville Tivy team in 2010 and pulled away from a game Smithson Valley team in 2011.

As the Cavaliers prepare to face Spring in the 2014 Area Playoffs Saturday, head coach Hank Carter sees an opponent as tough as anyone his team has played this season, especially on the defensive side, and one that brings back memories of those tough, early-round playoff games.

“They may have the most overall athleticism of any team we’ve faced,” Carter said of Spring’s defense. “Their skill guys can really run on the back end and they’ve got two defensive linemen who are a handful. They will be a tough test.”

Led by defensive tackles Lonzell Gilmore and Bravvion Roy, the Lions have been able to wreak havoc with opposing offensive lines. Gilmore’s made 85 tackles, including 19 for loss with four sacks. Roy has 83 tackles, including 12 for loss and seven sacks. The pressure the pair brings has helped defensive backs Ka’Darrian Smith (12 passes broken up with two interceptions) and William Skinner (63 tackles, two interceptions, three fumble recoveries) produce turnovers and hound opposing receivers.

Carter and junior offensive tackle Jeffrey Gibbs understand that the Lake Travis offensive line – an injury-riddled bunch – must hold its own against the Lions’ talented tackle tandem.

“I will say that our offensive line is a concern health-wise,” Carter said Monday. “We lost [sophomore tackle] Brenden Jaimes the other night and he’ll be out. So we need to get [senior center Garrett] Stotts (collar bone) back and have some other guys step up because we’re facing a much different test this week.”

With Jaimes out and Stotts not yet ready to return, Lake Travis will likely count on a line anchored by Gibbs, senior guard Aiden Rourke and senior Hunter Rhodes. Sophomore Tyler Barrett has seen significant playing time of late, as has senior Will James. Senior Jacob White and juniors Jacob Chairez, Griffin Lemley and Seamus Grady will likely see action as well.

Gibbs feels the line understands the challenge at hand.

“They are definitely one of the more athletic teams we’ve faced this year,” Gibbs said of Spring. “They have a good pass rush and they can play the run pretty well, too. They are a pretty well-rounded team, so we just need to play to the best of our abilities, take good steps, work as a unit and be close and talk every play.”

While the Cavaliers’ line has been playing well – Lake Travis has rushed for better than 130 yards in four of the last five games and averages 187 yards per game on the ground – Gibbs knows there’s room for improvement.

“I think we’re playing pretty well right now but we can always play better as a unit,” he said. [This week we need to improve our] physicality.”

Injuries have forced the Cavaliers into some reshuffling of the deck. While Gibbs has remained at tackle throughout the season, Jaimes moved from tackle to center for a spell before his injury. Rhodes has started at all three positions on the line. James has played both guard and center. While Rourke has played primarily guard, he’s played on either side of the center. Gibbs said the musical chairs makes continuity tough to develop, but the Cavaliers have done what’s necessary to remain a high-functioning unit.

“It impacts us a little bit but I think our coaches do a good job of practicing us in a way that it works out in our favor,” he said. “We get enough reps at the position we’re playing where we feel pretty comfortable with the guy next to us.”

They’ll have to be comfortable. Carter said the Cavaliers will want to operate at a fast pace, both to generate positive momentum of their own and make Spring’s big tackles play without the chance to catch their breath. While senior quarterback Dominic De Lira has had plenty of success throwing the ball thus far, Carter hopes the Cavaliers can get their running game cranked up with junior Abe Willows, who went over the 1,000 yard mark against Rouse last week.

“It would be nice if we could run the ball on these guys,” Carter said. “We’re going to need to weather the storm early. They are going to be a handful, especially the defensive front. It may take some time for us to adjust to their speed.”

Running the ball will also occupy both Gilmore and Roy, keeping them from becoming preoccupied with trying to get pressure on De Lira.

“The biggest thing about the running game is that it completely changes the defensive lineman’s mindset if he has to think about reading a key and taking on a block and fitting on a run, compared to just getting up the field and rushing the passer,” Carter said.

Rourke thinks the Cavaliers will be able to run the ball. Willows, when given just a little space, has been dynamic, rushing for 1,026 yards on the season, including big games against playoff teams Midway and Copperas Cove.

“Abe has been doing great,” Rourke said earlier. “We just focus on making the hole, making the block and letting Abe knock someone over, truck someone over. We just try to take care of our responsibility, what’s in front of us.”

While the Cavaliers want to get Willows loose on the Spring defense, they also need to contain what may be the most dynamic offensive player they’ve seen yet – Spring running back Xavier Jones. Between Jones and receiver Cameron Rose, the Lions have a pair of weapons Carter calls nightmares in open space, even for his speedy defense led by James Bailey and Chris Roller.

“We have to have great effort to the football because one-on-one we’re not going to fare to well against [Jones] or [Rose] in the open field,” he said Monday. “That’s going to be the first thing. Defensively we have to get to the football and keep our leverage on the ball. It’s not just keeping them from getting outside. Everybody’s got a gap and we’ve got to keep our gap integrity.”

Jones has rushed for 1,835 yards, averaging nearly 9 yards per carry. He leads the greater 6A Houston area with 27 touchdowns on the season. In addition to his 209 carries, Jones has caught a team-best 42 passes for another 554 yards.

Carter said stopping Jones – or at least slowing him – will be the challenge.

“They are going to get him the ball,” he said. “It’s not like a receiver where we can roll the coverage and kind of dictate things. They are going to hand him the ball and he may get 25 or 30 chances at it between that and the passes to him. That will be a challenge for us. He’s a unique athlete with a lot of speed.”

When the Lions don’t force-feed Jones, they will try and get Rose involved, either via the run or the pass. He’s caught 40 passes for 554 yards and five scores as one of three receivers that Alex Woods likes to utilize, along with Jones and Ronald Williams.

Carter said a fair comparison from a 2014 Lake Travis opponent, at least from an athletic standpoint, would be Copperas Cove, which featured an aggressive and athletic defensive line that pressured sophomore quarterback Charlie Brewer throughout the game. The Cavaliers withstood the pressure. Brewer passed for better than 300 yards and three scores in a 47-16 win. Carter doesn’t expect the same this time around.

Kickoff is set for 2 p.m. at Merrill Green Stadium in Bryan.