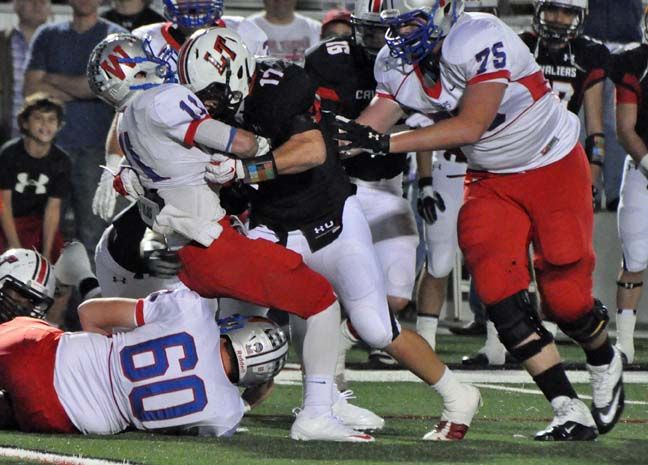 Annual rivalry not just 'another game'

Try as they might, Lake Travis’ players aren’t going to be able to convince anyone that this Friday’s game against Westlake is simply another game.

“It’s a faceless opponent,” senior receiver/defensive back Grant Foster said Monday. “That’s how we need to look at this.”

While Foster and his teammates may say the right things, they understand the importance of what’s coming. The eyes of most Central Texas football fans – and all of District 14-6A – will be on Lake Travis Friday for the ninth edition of the Battle of the Lakes.

While it’s not Texas-Oklahoma, the vibe changes. The Cavaliers aren’t lining up opposite Hays, Lehman or Del Valle anymore.

With good reason. The Chaps and Cavaliers remain the two most prominent programs in the region. Both make the playoffs every year and both use the game as a springboard into the post-season, though this year’s game doesn’t wrap up the regular season. Everyone, from fans in the community to players at practice, pay more attention, especially the coaches.

“It’s become a great rivalry between the two schools, which is fun,” Carter said. “It’s always fun to go play football on Friday nights, but 62-6 is a lot different than what it’s going to be Friday night, so it’s more stressful but those are the games you really look forward to.”

Lake Travis welcome Westlake following a 62-6 win over Austin High. In fact, the Cavaliers have won their first five district games by an average score of 56-12.

Lake Travis closed each of the last two regular seasons with Westlake, and they simply carried over their preparation and expectations from those finales into the playoffs. Often, they said the intensity they felt playing Westlake surpassed the intensity of some playoff games.

“This helps a lot because once we get later in the playoffs, [we’re used to it],” senior linebacker John Brewer said. “I feel like Westlake was the most intense game out of all of them last year.”

In fact, the last two games in the rivalry have been intense, with Lake Travis winning both with fourth quarter rallies. Lake Travis players say that last year they may have let the rivalry get in their heads a bit and didn’t play as well as they’d hoped, especially defensively, which is why they try to heed Foster’s advice to treat the Chaps like any other opponent.

“That’s kind of what happened last year,” Bailey admitted. “We are all thinking ‘oh, we’re playing Westlake.’ We don’t need to over-hype it.”

Foster said it falls to the seniors to keep the younger, more excitable players, measured in their approach.

“I feel like everyone kind of freaks out about this week,” he said. “I feel like that was the reason we came out [like we did last year], making it a big deal because we’re playing Westlake. They’re kind of supposed to, and it’s our job to keep everyone together.”

“We definitely played terrible,” he said. “I think that mindset is what makes this defense different. Alright, last year we were good for one quarter and terrible for three. We were good in the quarter that does matter, but we want to go out there for four quarters and play well.”

To play well this year, the Cavaliers must contain Westlake quarterback Sam Ehlinger, a sophomore who’s emerged in Todd Dodge’s offense. Ehlinger’s completed 66 percent of his passes and thrown for 1,568 yards with 17 touchdowns and added another 556 yards rushing. Reed Klubnick and Andrew Laycock provide Ehlinger with both possession options and deep threats at receiver. Klubnick has an area-best 53 catches and Laycock averages better than 18 yards per catch. Both have seven touchdowns.

“We can’t let them throw the ball over our head,” Carter said. “That’s how they’ve gotten their last few victories, throwing the ball over the opponents’ head with a lot of go routes, a lot of post routes. The quarterback also gets loose on called quarterback runs or just scrambles. He’s not going to stand in there real long with a guy not being open before he takes off. That means our front has to be disciplined in that.”

When watching Ehlinger on film, Carter doesn’t have to look far to find a comparable player. The Chap signal-caller reminds him of former Cavalier standout Colin Lagasse, who played four games at quarterback in three state championship years on the varsity.

“Maybe not quite as athletic at this point in his career as Colin, but thick, strong, a competitor, a very good runner, a very good passer,” Carter said.

Part of that familiarity is what adds to the rivalry, where the communities tend to measure each season’s success in large part on the result of this game.

“I think most people base our season off how we play against Westlake, a lot of people out in the community,” said Brewer. “So this is a big game, not only for us but for the community.”

The Cavaliers don’t dispute that theory, but they don’t espouse it either. They measure success by the length of their playoff run. To that end, the Westlake game might merely be the midway point of the season. That doesn’t mean the Cavaliers will take anything about the game lightly. After all, no one on the Lake Travis sideline has lost to Westlake, and they don’t intend to start now.

Even Foster, who crushed Westlake’s hope in 2012 with a 96-yard touchdown grab from Baker Mayfield with three minutes left in that game, knows his comment about treating Westlake as a nameless, faceless opponent won’t hold up.

“I can’t imagine losing to them,” he said. “Things would be so much different around here.”