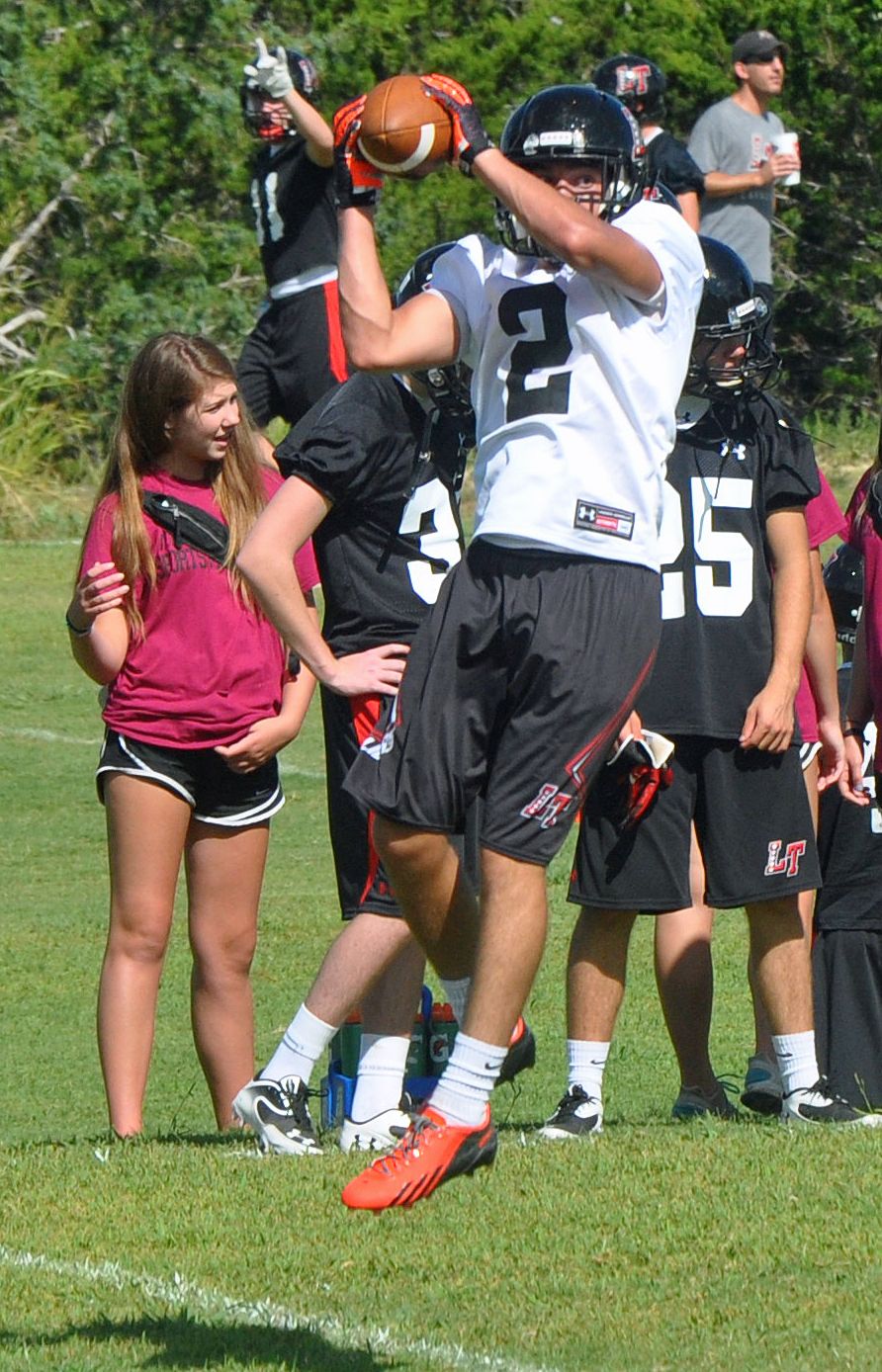 Quarterback: A pair of juniors will battle for the right to continue what has become the area’s pipeline to FBS. Into the footsteps of Todd Reesing (Kansas), Garrett Gilbert (Texas, SMU), Michael Brewer (Texas Tech) and Baker Mayfield (Texas Tech) will step the duo of Dominic De Lira and Nic Nezami. “Dom reminds me a lot more of Michael Brewer,” head coach Hank Carter said. “He’s very elusive in the pocket. Strong arm. Similar stature to Michael.” Nezami is taller and appears to be more of a pocket passer, but he can run as well. De Lira held an edge coming out of the spring, but whoever opens the season, Carter wants both ready to play. “We feel like we have two guys who can go out there and take the team down the field and score,” he said.

Running back: All eyes will be on senior Shaun Nixon, who’s shown no ill effects of a knee sprain that kept him out of four games last year. The Texas A&M commit has racked up 2,006 yards and 26 TDs rushing and another 818 and 6 TDs receiving in 23 career games. “We’re looking forward to Shaun having an amazing year, not only running the ball but catching the football and returning kicks and punts,” Carter said. Senior Dominic Packer filled in admirably with Nixon sidelined late last season, and Carter likens him to Darren Sproles, the undersized scatback who excels in space. Romey Kelso added size and improved his blocking to go along with his speed and catching ability.

Receiver: Lake Travis once again has plenty of talented receiving options. Nixon led the team with 36 catches last year. Senior Tyler Payne (26-399-4 TDs) proved reliable and junior Grant Foster (24-447-5) turned out to be a gamebreaker, evidenced by his 96-yard TD catch and run to beat Westlake and his near-miss on the Hail Mary against Pflugerville. Carter said junior Bear Christianson might be, well, a bear to cover. He’s 6-foot-5 and physical, reminiscent of Griffin Gilbert. “He reminds you of Griffin [Gilbert] with his stature, but Griffin was an All-American so I want to be careful,” Carter said.

Offensive line: When told Lake Travis started 10 different players on the line last year, Carter laughed. “At least. Surely it was more than that.” Three players who started the majority of last season are back: junior center Garrett Stotts and senior guards Sean Peacock and Tanner Volpe. “Those guys were pretty consistent in a line that was changing week to week,” Carter said. A handful of players, including two transplanted Cajuns, will vie for the tackle spots, with Louisiana natives Drew Oberle and Ryan Richards taking the early lead. Both are tall and lean. Carter said Zach Crowell, Austin Bewley and Brent McCarty would be in the mix as well. “I think our offensive line is going to be much improved,” Carter said.

Defensive Line: Lake Travis returns a trio of starters, all with the ability to get after the quarterback with a combination of power and speed. Senior Zach Davies moved in prior to the 2012 season and earned all-state honors after making 63 tackles including 16 for loss along with 9.5 sacks as a defensive tackle. Ends Michael Islava and Feno Pearson each started more than half of the team’s games and combined for 3 sacks. While junior Hunter Rhodes may have the inside track on a spot at tackle, sophomore Tevin Paul, who played running back in middle school, has already caught Carter’s eye. He stands out, at 6-3, 225, and Carter sees a bright future that might just start now. “We don’t have sophomores who look like him. He’s a big, fast, athletic kid who can play either defensive tackle or defensive end. He’ll give us some depth there with some unique size. Hopefully as he develops he’s going to be a force to be reckoned with, giving people fits for the next couple of years.”

Linebacker: Carter feels enough confidence in the trio of Hagen Patterson, John Brewer and Jason York that he asked Luke Hutton to move to free safety to bolster a secondary decimated by graduation. Patterson (95 tackles in 2012) gives the Cavaliers a big body with enough quickness to tackle in space, and Brewer and York can play outside or inside. “We felt good enough about those guys, along with Ben Bataille and Ian Friedman, to allow us to move Luke back to safety,” Carter said.

Defensive back: After leading the team with 138 tackles at linebacker, Hutton drops back to assume the free safety spot most recently occupied by Hunter Streuling. Though he’s never played free safety, Hutton’s no stranger to the secondary, starting at rover and making 103 tackles as a sophomore in 2011. “Everyone knows about Luke: big, physical, strong, good athlete,” Carter said of his defensive leader. James Bailey (79 tackles as a sophomore) returns for his second season in the Rover role, where he’ll double as a rush linebacker and cover safety. Chris Roller moves into the secondary as strong safety. A heady athlete, Carter said Roller, a junior, reminds him of former all-stater Dane Balasz. Corner will be the big question mark, but Carter believes converted receiver Chayce Pannell can be a lock-down type. “He has the ability to do some things at corner that we haven’t seen with his combination of speed, athleticism and just being explosive in his cuts,” Carter said. Sophomore Tanner Bush and converted receivers Austin Villanueva and Jacob Putman will compete for the other corner spot.

Special teams: With reliable Kevin Marcotte graduated, the Cavaliers will rely on the combination of Brannon Satterfield and Dylan Tracy to handle the kicking. Tracy is a soccer player still getting used to kicking a pigskin but made big strides over the summer. “We’ll see how the combination of those two guys plays out, but compared to where we were at the end of football season, I was really, really concerned about our depth at kicker. But I think with those two guys, we’re going to be in good hands.” The Cavaliers need to find a punter, but Carter said De Lira has punted in the past. Nixon and Packer give the Cavaliers a combination of speed and power in the return game. Opponents will kick deep at their own risk.