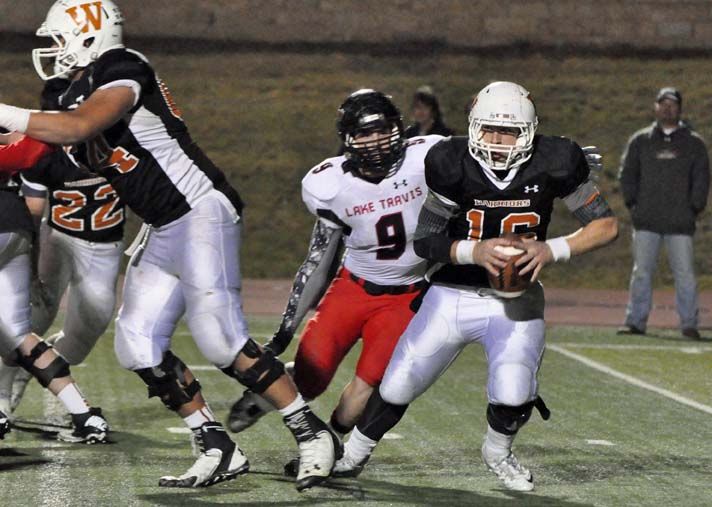 In a way, all of Lake Travis’ football playing seniors have the same goal in mind. Not the goal to win the state championship, but one that goes along with it.

For most, the season’s end – whenever it comes – marks the end of a playing career. Save for Shaun Nixon, Zach Davies and possibly a few others, the bulk of the 2013 Cavaliers won’t play the game again. One, though, won’t give in to the thought that this season might be his last.

Senior defensive end Michael Islava knows the playoffs may be his last chance to catch the attention of college recruiters representing schools that could use a defensive player with a knack for getting to opposing quarterbacks. Islava’s pass rushing repertoire was on full display Friday night, when the 6-foot-2, 200-pound defensive end sacked, badgered and thoroughly harassed Westwood quarterback Bear Fenimore into his worst high school performance.

Lake Travis made quick work of Westwood, cruising to a 52-7 bi-district win. Fenimore, a former Lake Travis student and Islava’s freshman teammate, bore the brunt of Lake Travis’ domination. He entered the game averaging 298 yards passing per game. Led by four sacks from Islava, three from Davies and two from Tevin Paul, the Cavaliers sacked Westwood’s quarterbacks 12 times and held the Warriors to just 44 yards of offense.

“It’s kind of funny,” head coach Hank Carter said Tuesday. “Zach Davies had three sacks and he got outdone. You have two sacks out of the sophomore [Tevin Paul] and you get outdone by two guys.”

“I think that any defensive end will tell you that when there isn’t a big threat of a run, they are chomping at the bit,” Carter said. “He had a great night. He rushed the passer about as good as anybody we’ve had.”

Afterwards, Islava said the sight of his former teammate seems to spark the Lake Travis defense.

“Just seeing Bear sparks everybody up,” Islava said. “I love seeing Bear. He’s a great athlete. He’s going to Houston. It’s just great that you get to play against someone who’s going D1.”

Adding to Islava’s spark was the opportunity to rush against Brendan Moore and Seth Pittman, a pair of larger linemen who have drawn interest from Division I schools.

“He played great,” Carter said. “He knew it was going to be a big challenge going against a very talented player.”

“I just love having fun,” he said. “I see that there’s D1 potential in the linemen and I just love the challenge. I love going after it and getting after it.”

Islava and his teammates will get another challenge Saturday in Bryan in the Area playoffs against Humble Atascocita. The Eagles are 10-1 and won their bi-district game 42-24 over Lufkin. The Cavaliers will have to contain Atascocita quarterback Greg Campbell. Campbell passed for 241 yards and two scores and rushed for another 186 yards and four scores.

“Tall kid. Fast,” Carter said of Campbell. “He’s a strider so it doesn’t look like he’s all that fast but nobody really catches him. He gave Lufkin fits. That was the difference. He took over that game.”

The Eagles run a spread offense with plenty of talent around Campbell.

“Athletically, this team is pretty special,” Carter said. “These are types of kids we are going to see as we get deeper in the playoffs. Reminds me of a Judson or Dawson team. Big and fast. Will be a good test.”

But make no mistake, Carter said. As Campbell goes, so go the Eagles. Campbell’s passed for 2,284 yards and 26 touchdowns and rushed for 1,111 yards and 15 scores.

“Anytime someone has a dynamic quarterback who can make plays with his arm and his feet, it’s a challenge,” Carter said of Campbell. “They can beat people a lot of different ways but the guy who makes them go is their QB. He’s tough. He’s really fast. It will be a great challenge for our kids.”

For Islava and his defensive teammates, the Eagles may represent the toughest test to date, another challenge for Islava to step up and meet. To help his team to another win, in the process showcasing the skills he hopes will catch the eyes of recruiters there to watch others.

Islava knows he’s small to play on the defensive line but wouldn’t mind the chance to stand up and play linebacker in college.

“I’d love to play inside linebacker or outside linebacker,” he said. “I just love the game of football. I’m still going after a scholarship. No one’s asked me yet, but …”

Carter said a position switch might not be necessary.

“At heart he’s a defensive end,” Carter said. “Being able to rush the passer, playing with leverage, being physical, playing hard, those are things that everybody looks for. Maybe he’s not your prototypical Division I defensive end, but he handled himself pretty well against a Division I tackle Friday night.”

Islava possesses an innate ability to get to the passer, reminiscent in many ways to former Lake Travis defensive end Tyler Pauslen, who got recruited as a linebacker but moved back to his natural position early in his college career at Eastern Illinois.

“People may look at standing him up [at linebacker],” Carter said. “They did the same thing with Tyler Paulsen but he ended up getting back down and playing end. A lot of things Mikey does reminds me of Tyler, especially with the pass rush. He finishes his pass rush probably better than anyone we’ve had.”

Paulsen started on a defense that helped Lake Travis to a pair of state championships. Islava won’t be able to match that, but Carter knows Islava will continue to be a driving force as far as the Cavaliers can go.

“He’s extremely physical and he’s playing so hard,” Carter said. “That’s the thing we are so pleased to see. His effort is outstanding.”

See the story as it ran in the Lake Travis View here, along with other LT football news.