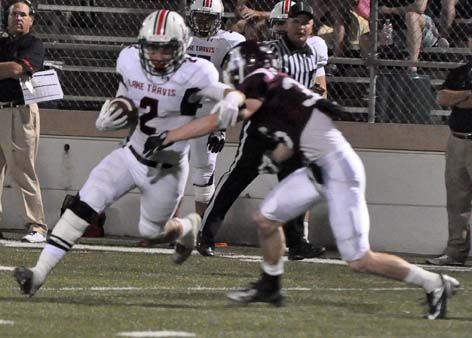 The Cavaliers’ junior receiver, who missed the team’s first three games while recovering from a knee injury suffered in the team’s pre-season scrimmage against Vandegrift, made his first catch a memorable one. On the team’s second play, junior quarterback Dominic De Lira lofted a pass deep down the Austin High sideline. Foster chased it all the way, launching himself into a dive at the last minute, cradling the ball as he hit the turf at the Maroons’ one-yard-line.

“Whenever it was in the air, I wasn’t planning on diving because they were telling me I shouldn’t be diving [with the knee], but I just had to,” the junior explained.

“That’s kind of his thing, and he does a great job catching it when he does,” Lake Travis coach Hank Carter said.

The coaches wanted to get their speedy deep-threat involved early.

“Coach [David Collins] told us before the game that he was going to call a deep pass to me,” Foster said. “He said it was going to be like the seventh or eighth play, but then I guess he saw something in the [press] box and called it on the second play.”

Foster’s grab set up the first of Shaun Nixon’s three first-quarter touchdowns and opened the floodgates to a 51-point first half. Foster also turned a quick slant into a 23-yard gain on third-and-22 to keep a drive alive, leading to Dylan Tracy’s 26-yard field goal, and later caught a deep pass from Nic Nezami, setting up Tyler Payne’s touchdown on the final play of the first half in the 51-12 win. Foster finished with three catches for 86 yards. He didn’t play in the second half.

Foster said the short catch and run, where he bounced off several tacklers before getting dragged down, helped erase any concerns his knee would hold up.

“In the warm-ups my knee felt fine,” he said. “I had it all taped down, and I couldn’t move my ankle, so all I could think about was my ankle. I wasn’t worried about the knee at all. It felt fine while I was playing. Getting hit and getting up helped. I didn’t know what to expect. The coaches were telling me, ‘on the first play, when you get hit it will scare you a little bit, but you’ll be fine. Just get up and go on to the next play.’ And it did.”

“I’ve probably asked him 100 times since he’s gotten back in pads, ‘How you feeling? What’s it feel like? What are you thinking?’” Carter said. “He’s probably tired of hearing from me. I watched him move around good, and I think it’s something that will get better and better each week. He’ll keep getting closer to 100 percent.”

Foster’s return against Austin High ended a series of frustrations for the receiver who emerged as the team’s primary deep threat last season. The 2012 season ended with the first-round playoff loss to Pflugerville, when Foster couldn’t quite get a toe inbounds after running under Baker Mayfield’s Hail Mary pass against the back of the end zone. Then came a loss in the state seven-on-seven tournament, the injury and a 25-19 loss to Judson to open the 2013 season.

“I’ve never had injuries before – knock on wood,” he said. “I didn’t really know how it felt. I thought it wasn’t going to be that bad, but watching the games was terrible. Especially when we lost the first game against Judson. You start thinking that everyone around Texas thinks you’re nothing. Not being able to do anything about it, just having to watch….”

But now he’s back and part of an offense that continues of find its groove. Getting healthy has helped Lake Travis’ cause. The Cavaliers have scored 104 points in their last two games, both convincing wins. Confidence on the offensive side, not surprisingly, runs high.

“It feels like we’re getting the confidence back,” Foster said. “We were down on ourselves [after the Judson game] but we knew that we were a good team. And especially now that everyone’s healthy, we feel like we have a lot of confidence.”

The Cavaliers will carry that confidence into a showdown with unbeaten Bowie, which comes to Lake Travis Friday off a 21-16 win over Westlake.

“We didn’t need Bowie to beat Westlake for us to have respect for them and know what kind of team they are,” he said. “They are a good team and a good program.”

Carter said his team has improved week-by-week, a trend he hopes to see continue Friday in what should be a playoff-like atmosphere.

“We’ve continued to play better every week and that’s all we can ask for from the kids,” he said. “We want to play hard and we want to get a little bit better every week, and we’ve done that. Friday should be a big test and a great atmosphere.”