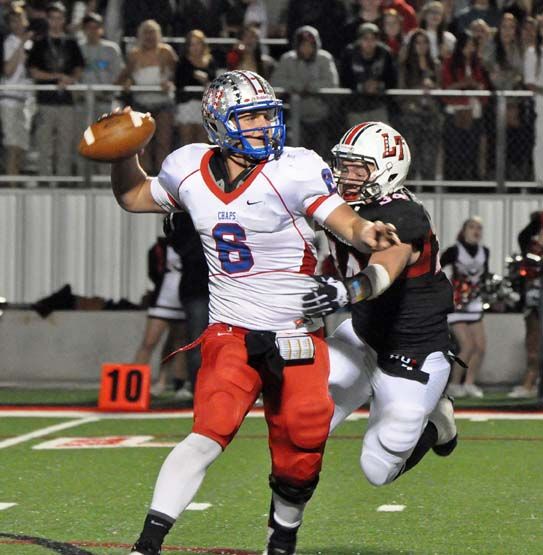 For three quarters of last Friday night’s Battle of the Lakes, Lake Travis and Westlake waged a battle eerily similar to the 2012 meeting.

Using its beefy offensive line, a stingy defense and the craftiness of junior receiver Sean Rollings, the Chaps pounded out a 27-14 lead when Dallen Nelson kicked a field goal at the end of the third quarter. It marked the second consecutive year in which Westlake led Lake Travis entering the fourth quarter. Last season, Westlake led 9-7 and eventually 11-7.

In 2012, Lake Travis staged a fourth quarter rally on the strength of one key defensive stand with four minutes left. Leading 11-7 and facing a fourth and short at the Lake Travis 5-yard line, Westlake went for the knockout punch rather than a field goal that would extend the lead to 14-7. After running at will against the Lake Travis defense all night, the Cavaliers came up big and made they game-saving stop. Then, two plays later in the shadows of his own goalpost, Baker Mayfield made the play of the 2012 season. Scrambling away from pressure five yards deep in the end zone, he saw Grant Foster come open and lofted a ball toward midfield. Foster caught it and did the rest, scoring a 96-yard touchdown that won the game.

The Cavaliers needed a similar rally this season, and got it, though they didn’t need a 96-yard play to make it happen. Instead, Lake Travis’ high-octane offense went old school. The Cavaliers leaned on their offensive line and fed the ball to Texas A&M-bound running back Shaun Nixon, who had gained a grand total of three rushing yards through three quarters.

Nixon carried the ball 16 times for 124 yards in the fourth quarter to lead the Cavaliers’ comeback.

“I already knew it was going to happen,” he said. “I’m ready to put everything into this team. I’m all in.”

The comeback began with Nixon rushing four times for 57 yards on a 67-yard drive culminating in a 15-yard touchdown pass from Dominic De Lira to Tyler Payne. Lake Travis’ defense promptly went out and forced a quick Westlake punt, giving the Cavaliers the ball near midfield with momentum and, more importantly, the confidence that they would score again.

“No [doubt], none whatsoever,” Payne said. “Everyone on that sideline knew that it was our time. We knew we were going to go put that in the end zone.”

Lake Travis’ line began pushing the Westlake defense around. Nixon took advantage of the space, carrying eight more times on a 10 play drive. Facing third down from Westlake’s 26, Nixon gained 12 and then 13 yards on successive carries before scoring the go-ahead touchdown on a direct snap.

“We came out and talked to the linemen,” Nixon said. “We told them we had to put the hats on ‘em and get out there and get to work. We powered them downhill and it paid off for us.”

Leading 28-27, Lake Travis turned to its defense for one more stop. It came quickly. Sophomore defensive tackle Tevin Paul pressured Westlake’s Jordan Severt into successive incompletions, and the Chaps punted the ball away with 3:13 left never to see it again. Nixon rushed four more times, gaining two first downs and killing the clock on the 28-27 win.

Lake Travis led 14-7 early on the strength of two Dominic Packer touchdowns. He caught a fourth-down pass from De Lira and turned it into a 31-yard touchdown on Lake Travis’ first possession and then returned a punt 48 yards for another score. He also took several hard hits and didn’t play in the second half.

Down 14-7, Westlake scored the game’s next 20 points. Four of Westlake’s scoring drives covered 60 yards or more, the first time since early in the season that Lake Travis’ defense has struggled to get off the field. Lake Travis coach Hank Carter credited Westlake for its scheme and execution but said his defense had some uncharacteristic struggles before righting the ship in the fourth quarter.

“Obviously I love the outcome but we don’t need to be beating our chests too much about how the defense played,” he said. “At the end of the game we played well. We got after it and played with more energy. We just want to see more of it.”

The win gives Lake Travis its second consecutive District 15-5A championship. It also gives the team – and its coach – confidence that the Cavaliers can respond in pressure situations.

“It’s nice to see us battle back against a good football team,” Carter said. “I think that gives our team confidence. I also think that’s going to be valuable. There’s no substitute for experience in this type of thing. Those situations, when we have to communicate and it’s a loud crowd playing against a team that was doing some of the things they were doing, those are the type of things we haven’t seen in a while and it’s hard to replicate that in practice. So that was a great experience for us. I think we’re going to learn and grow from it.”