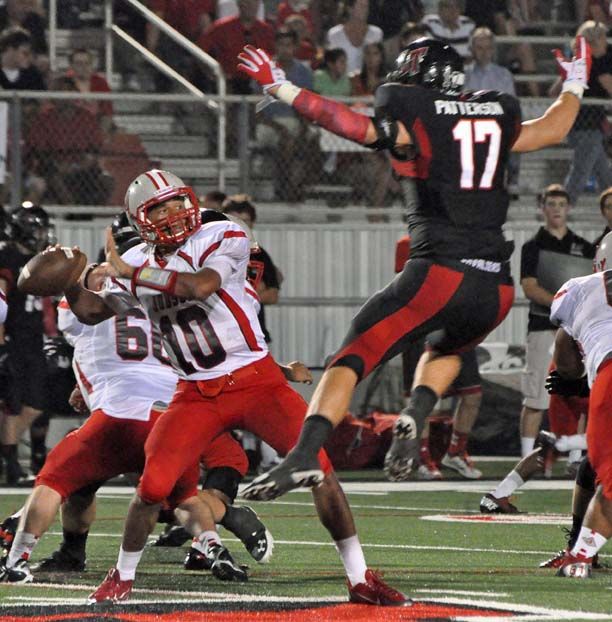 Defense steps up to ground Rockets after halftime

Lake Travis’ 2013 season opener left much to be desired – especially in the win column. But Friday’s 25-19 loss to Converse Judson wasn’t without bright spots.

The Rockets soared to a 25-10 lead in the second quarter by taking advantage of some crucial mistakes by the Lake Travis defense. By halftime the Rockets had gained (unofficially) 207 yards on 36 plays, and three of their four touchdowns came on drives that started inside Lake Travis territory, two inside the Cavalier 30.

“We didn’t make the tackle a couple of times and there were several instances where we just needed to do our assignments,” Cavaliers coach Hank Carter said afterwards of his team’s slow start. “We want to give Judson credit. They had a good game plan for us and executed, but at the same time, as bad as we played we think we should have won the game.”

At halftime, the Cavaliers regrouped and came out a much different and more resilient defense.

“We talked about things as a secondary,” said senior cornerback Chayce Pannell.

Led by Pannell, starting his first game on defense after playing receiver last year, and veterans Luke Hutton and Zach Davies, the Cavaliers put the clamps on Judson’s offense. In the second half, Judson gained just 52 yards (unofficially), including only three net yards rushing.

“We can’t afford to bite on fakes and we needed to do a better job converging on the ball,” Pannell said after the game.

Pannell played his debut at cornerback like a grizzled veteran. He displayed the short memory required of a cornerback, bouncing back from getting beat for fourth quarter catch that put the Rockets at the Lake Travis 1-yard line.

“When you play secondary, it’s just a matter of time before someone makes a play on you,” Carter said. “They’re going to throw darts all game long and they’re going to get one to hit the bulls-eye. They did on him and he’ll learn from that play. But he didn’t hang his head on it and he was able to come back and make a play.”

He provided the only points of the second half – a safety – when he flattened Judson receiver Andre Wilson in his own end zone early in the third quarter. He broke up two passes. And after getting beat on a post pattern that put Judson on the doorstep, he punctuated the ensuing goal-line stand by blocking Colby Doyal’s field goal try, leaving the Cavaliers in striking distance.

Carter liked what he saw from the former receiver.

“The more he plays the more comfortable he’s going to get,” Carter said. “It was the first game he’s played corner and he did well, so I think he’ll continue to get better and better as he gets experience there.”

But afterwards, Pannell didn’t revel in plaudits for a gutty performance.

“I’d rather have a game where I didn’t make a block or a tackle that we won,” he said.

If the loss left Pannell and his teammates seeing red, they’ll get a chance to make amends Friday at New Braunfels Canyon, playing ironically on the Cougars red turf field. Lake Travis topped Canyon 49-7 in 2012.