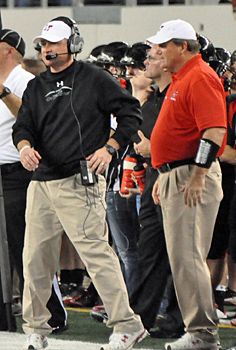 Cavs identify one difference as 5A school

As Lake Travis won its fifth consecutive football championship in 2011, some Texas high school football pundits tried to minimize the feat. They said the Cavaliers’ domination at the 4A level somehow wouldn’t translate in the larger, tougher 5A level, where the schools with the largest enrollments – and conceivably best football programs – compete.

From his desk in the Cavalier Athletic Complex, Hank Carter has always chosen not to enter that discussion. His opinion has always been the same. Good football is good football. The number of A’s attached to a school’s classification doesn’t matter.

“Here’s a prime example.,” he said this week as his Cavaliers prepped to play this weekend for the Region II championship. “A&M Consolidated is going to be 4A next year, so what’s going to be different [about them]? They’ll be a heck of a football team that will be 4A because they opened up a new school over there.”

Carter knows all about A&M Consolidated. The Cavaliers and Tigers meet Saturday in Temple. And for the first time, Carter spoke about the differences he’s noticed now that the Cavaliers are advancing through the 5A playoffs after their 4A dominance.

“There’s a lot of things different about the fact that we’re 5A,” he started on Tuesday.

The Cavaliers and Tigers are set to kick off at 2 p.m. Saturday at Temple High School, where they’ll deal with Mother Nature, who apparently has a problem with the schools playing. The threat of severe thunderstorms in College Station forced the teams to cancel a regular season game in September. If forecasts hold, Saturday’s game will be played with temperatures topping out in the mid-to-upper 30s with a distinct possibility of precipitation ranging from freezing range to sleet to snow with a consistent North wind.

“I wouldn’t necessarily say the competition is that much different, but it’s the elements that we play in,” Carter said. “We don’t play in the [Alamo]dome any more, and this is a year where we’re finally getting some rain and bad weather. We haven’t played a game in cold weather probably since 2009 in San Marcos (vs. Alamo Heights) before we played Atascocita. I mean a game where it felt like the weather was really going to make a difference. Now, it looks like we’re going to do it again. I love it. It just adds a little something to the storyline of the game.”

During its 4A run, the Cavaliers played in Region IV, which took them south for regional games against teams from San Antonio, Corpus Christi and the Rio Grande Valley. More often than not, weather was warmer. And to further take elements out of play, the Cavaliers and their opponents often settled on the Alamodome as a neutral site, and it became the Cavaliers’ home away from home.

Since losing in the 2004 playoffs to Alamo Heights in the dome, Lake Travis hasn’t lost there, winning seven straight playoff games and another regular season game to boot. But, playing in Region II following reclassification up to 5A, the Cavaliers play teams from Dallas, Houston and points in between. Good-bye Alamodome as a mutually convenient neutral site.

While many -- himself included -- love the climate-controlled convenience of the dome, Carter loves that elements are involved again.

“I think it will be fun,” he said. “I know that from my playing experience, other than the wins, the games I remember the most are the ones in nasty weather. Those stick with you, so I’m looking forward to it.”