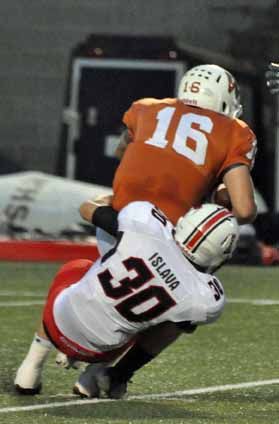 Facing the area’s most prolific quarterback Friday night, Lake Travis’ defense knew it couldn’t afford to let Westwood’s Bear Fenimore sit back in the pocket with time to throw.

Led by senior Mike Islava and sophomore Tevin Paul, the Cavaliers sacked Fenimore a half-dozen times and hurried him a number of other times, keeping the Houston-bound senior who played freshman football at Lake Travis from throwing a touchdown pass. While he did pass for 262 yards, much of that came in the first half and pressure also resulted in an interception that Jason York returned for a late touchdown.

“Our conditioning played a big part,” Lake Travis coach Hank Carter said Tuesday. “I thought we were able to get a lot of pressure on them late in the game because we were still able to play hard as the game went on.”

For Islava, who played well against Westwood as a junior before missing time with an injured ankle, the game proved especially rewarding.

“It’s my senior year and I’m really appreciative I’m getting the opportunity to be a starting defensive end at Lake Travis,” he said Tuesday after racking up 10 tackles and three quarterback sacks. He leads the Cavalier defense with five sacks on the season. “It was Bear Fenimore, who used to come here, so it was really good seeing him every once in a while.”

For his part, save for a little bit of extra motivation supplied by the Westwood lineman assigned to block him, Islava said the defense as a whole did its job. The sacks came from team-applied pressure, not one player in particular.

“We had some really good stunts,” Islava said. “We were relentless off the ball and you have to go and attack on each play. I could tell [Fenimore] was getting frustrated, but it was more the lineman that was playing against me. He said, ‘Come get it, buddy,’ and on the next play I sacked [Fenimore], so we gave them what they wanted.”

Lake Travis quarterback Dominic De Lira knew what Fenimore felt. Not only did De Lira face heavy pressure in Lake Travis’ opener against Judson, he had to face Islava and the other Cavaliers who spent Friday night chasing Fenimore as the scout team quarterback earlier in his career.

“We have the fastest defense, one of the best defenses in the state,” de Lira said Tuesday. “Freshman year I was on scout team and I was playing some of these guys and they were beating me up, so I definitely know how it feels for Bear.”

Carter praised Islava’s effort, not only Friday night but to recover from a badly injured ankle and re-earn his starting heading into the season.

“He has consistently played well for us all three games,” Carter said. “I’m really proud of him. He came out last year as the starter and then got a really bad ankle injury. He ended up playing but he was never the same player. He’s healthy right now and he’s a very physical player. He’s a tough matchup for an offensive lineman because he’s pretty fast and he’s very strong. He plays with leverage and he plays hard. That’s what you saw the other night. He was in on three or four sacks and probably caused another two by making Bear step up in the pocket.”

Quarterback Kobe Miller averages 197 yards per game passing, and Derrick Dick has been his primary target with 17 catches for 258 yards in three games. Dick will also carry the ball and return kicks, where he’s averaging nearly 30 yards per kickoff return. Carter said the defense will have to stand tall.

“We are going to have to tackle,” he said. “They’ll have the best player – [Dick] -- we’ve seen all year. He’s a really special player. They are talented, with two good running backs and two other good receivers, one reminds me of Tyler Payne – big, fast. Their offensive line is good at what they do. They are very aggressive, a real physical football team and they are smart. Their plan on offense is really, really smart and they do a good job with it.”

Consolidated has become very familiar with District 15-5A in the last two seasons. Consol beat both Lake Travis (30-28) and Westlake (35-17) during the regular season last year. The Chaps got revenge with a 45-2 win in the Area playoffs and came from behind to beat the Tigers last week 38-32.

“They score a lot of points, and they can do it against a really good team,” Carter said.