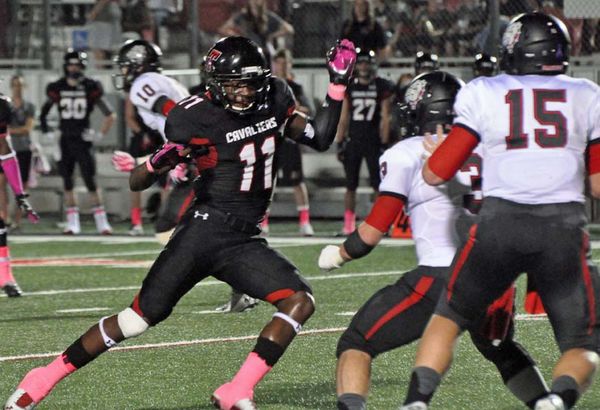 Earlier this season, Lake Travis coach Hank Carter pointed out something that might be going unnoticed with the Cavaliers’ defense.

Tackle Zach Davies and end Michael Islava have been playing very well, the coach said, forcing opponents to take more than one lineman to block each. That, in turn, takes blockers away from Lake Travis’ linebackers and defensive backs.

“What ends up happening is a lot of times Zach ends up creating opportunities for other players to make some plays,” Carter said following his team’s 51-12 win over Austin High. “That’s good, and Mikey is going to do that as well. Those guys are a tough match-up.”

In last Friday’s 43-0 win over Bowie, junior rover James Bailey might have benefited from the extra attention Bowie’s linemen paid to Davies and Islava. Or, he simply continued the process of rounding into form after missing the season’s first two games due to injury.

“It’s fair to say I was trying to make up for lost time,” the junior said Tuesday.

Bailey wasted no time changing the game and sparking the Cavaliers’ rout. In the first quarter, he blocked a punt, recovered a fumble and registered a sack of Bowie quarterback Austin Eschenburg. In all, Bailey registered eight tackles, including two for a loss, and the sack, fumble recovery and blocked punt, but his fast start – especially with the block in the opening minute -- set the tone for an unexpected blowout.

The Cavaliers didn’t plan on blocking that first punt – they had the return call on. But when the snap sailed a bit high, Bailey took advantage, Carter said.

“But if there’s a bobble or a bad snap, then he’ll be there to block it, and he made the play,” the coach explained. “We needed it at a time where we really needed to get the momentum going. It was a great way to start the ballgame. He had a pretty good first quarter.”

On the next possession, Bailey recovered a fumble when teammate Chris Roller knocked the ball from Bowie’s Steve Johnson, who had beaten Bailey for a third down catch."

“He beat me to the outside and then I missed the tackle,” Bailey said. “Chris Roller came over and he poked the ball out. I saw it and had to jump on it real fast. The sack was just doing what I have to do and just getting there.”

The sack came with the Cavaliers up 14-0, having converted the first two breaks Bailey provided into scores from Dominic Packer and Shaun Nixon. Bailey lined up covering Johnson in the slot, then crept toward the line of scrimmage and blitzed at the snap. Bowie never adjusted its blocking, and Bailey took care of the rest.

“Our coaches teach us how to disguise our blitzes, and we worked on the snap and the cadence, so I timed it off that,” he said. “I was a little surprised because I had a free shot.”

In the end, Lake Travis held Bowie’s previously balanced attack to just 130 yards of offense. The Bulldogs crossed midfield just twice and their best scoring chance ended with a missed 47-yard field goal. Carter said he didn’t expect his team to completely shut down Bowie’s offense, but the team’s preparation paid off.

“I know that our kids worked really had during the week and felt like they had a really good grasp of what Bowie was going to try to do, and they ran to the football,” Carter said. “That was a big deal. We tackled pretty well, and even if we missed the tackle guys were there to back them up because they were hustling to the ball.”

“They just had no life,” he said. “Usually, when we saw film and when we went to their game with Westlake, they were fired up. But they were just kind of quiet. Their sideline wasn’t all hyped up. Any time you can shut someone out, it feels good.”

Lake Travis will look to keep feeling good. At 2-0 in District 15-5A play, the Cavaliers stand alone atop the standings with games against Akins, Anderson and Del Valle to play before closing the regular season against Westlake and moving on into the postseason. Bailey knows there is still work ahead.

“We’re not where we need to be yet, but I feel like we’re going to strive to get better,” he said. “We need to practice hard. When we don’t practice hard we begin to drag and we don’t go out there and try to shut everyone down or out. Each day, each week, we just need to prepare and take care of the things we have to.”

While the next three opponents may pose huge threats on paper, Carter said the Cavaliers will continue to give each opponent their best shot.

“We’ll go out there and we’ll play Akins and give them our best shot,” he said. “Their record doesn’t indicate that they are as strong as some of the opponents we’ve played so far, but we’re going to go out there and play as hard as we can.”

Lake Travis isn’t looking past Akins, but Carter said his team is preparing for the long haul, not just games in the coming weeks.

Anatomy of a sack

With his team leading 15-0 late in the first quarter, James Bailey forced a Bowie punt when he sacked Austin Eschenburg on third down.

Bowie had just forced a Lake Travis punt, stemming the Cavaliers' fast start. To gather some momentum of their own, Bowie needed to convert a third and short. Bailey, though, had other ideas, and his sack on a blitz kept the Dawgs chained up.