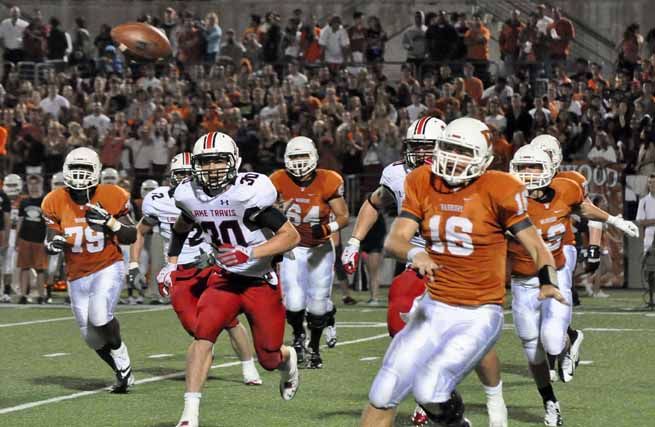 For Lake Travis opponents, week 3 saw a season-long trend continue. Most are still struggling as non-district play ends, two opponents dropped games to state-ranked teams, and a perennial regional force continued to find its way back.

Half of Lake Travis’ 10 2012 foes lost again this week, none more frustratingly than Westwood. The Warriors, who gave Lake Travis a stern test in week 2, dropped a 12-9 decision to resurgent 4A Cedar Park. The Timberwolves again relied on the stifling defense that has been a calling card for the past two seasons, both of which ended at Lake Travis’ hands in very tough Region IV-4A championship games. For a summary of the Timberwolves’ win over the Warriors, click here. Don’t look now, but Cedar Park has won back-to-back games and heads into district play on with momentum. They’ll need it. They take on Leander, ranked second state-wide in 4A, to open district play Friday night.

Westlake also faced a stern test against a state power and came up short, further continuing a puzzlingly frustrating start for coach Darren Allman’s team. Westlake led Cibolo Steele, the top ranked team in San Antonio, 10-7 at the half but then surrendered 28 straight points as the Knights took advantage of some Chapparal turnovers and cruised. The Knights have played in the last two 5A, Division II championship games, winning in 2010. Details here. Westlake has lost three in a row after what looked like a solid win over state-caliber Cedar Park to open the season.

The Chaps open District 15-5A play this week against rival Bowie, which will enter fresh off a 31-20 win over S.A. Roosevelt, ranked ninth regionally by the SA Express News, to even its record at 2-2. Bowie’s Steve Johnson led the attack with 133 yards rushing. The Bulldogs enter district play having won their last two games.

Converse Judson, Lake Travis’ zero week opponent, won its second in a row, topping San Antonio East Central 28-18. The Rockets haven’t missed the playoffs in ages and seem to be adjusting to new coach Mark Smith’s offensive and defensive schemes. The defense stepped up big against East Central, which the SA Express News ranked 10th in its area poll, allowing more than 100 yards less than it had on average in its first three games. And Jarveon Williams continued his early-season rushing roll, gaining nearly 200 more yards after a 300-yard performance in week 2. Details here.

Austin High, which travels to Lake Travis this week for the Cavaliers’ Homecoming, earned its first win for new coach Mike Rosenthal, the former NFL offensive lineman and Notre Dame All-American. After three losses, the Maroons went with a ground-and-pound attack to run over McNeil 48-27. Quinta Goode led three Maroons who went over the 100-yard mark with 158 yards on just 13 carries and two scores. Receiver Isaiah Jones moved to quarterback for the game and also rushed for 100 yards.

New Braunfels Canyon finally got into the win column as a 5A program, beating Austin LBJ 48-28 on its red turf.