In its 24-14 win over Bowie Friday night, Lake Travis failed to pass for a touchdown for the first time since the 2010 championship game against Denton Ryan. Baker Mayfield had thrown at least one touchdown pass in every game he’d played since the opener of the 2011 season, when he stepped in for the injured Colin Lagasse and connected with Zach Austin for a score against Westlake.

In his 21-game streak, Mayfield threw 60 touchdown passes while giving up only six interceptions. In 2012, he’s thrown for 15 touchdowns and just one interception.

“We’ll just have to start a new one,” head coach Hank Carter said when informed that the streak had ended.

The 21-game stretch is the second-longest such streak in school history. Lake Travis, with Garrett Gilbert, Michael Brewer and Lagasse starting games, threw at least one touchdown pass in 58 consecutive games from 2007-2010.

In the third week of the 2007 season, an 18-10 win over Westwood, Gilbert rushed for a pair of touchdowns but didn’t get one through the air. The next week, he threw three scoring passes against Burnet, and the Cavaliers managed to strike through the air each week until the 2010 state quarterfinal playoff game against Cedar Park, when the Timberwolves kept Brewer from a touchdown pass. The Cavaliers still won the game thanks to a punt return from Cameron Wrinkle and touchdown runs from Michael Pojman and Brewer, whose scoring run provided the winning points in the 21-20 thriller.

In the 58-game streak, Lake Travis’ starting quarterbacks put up wildly successful statistics, as might be expected. In his 29 games during the streak, Gilbert threw 101 touchdown passes and only 12 interceptions. When Brewer took over and started 26 of the next 29 games, he managed 64 touchdowns against 17 interceptions. When Lagasse filled in for Brewer, starting three games in 2010, he added seven touchdowns and just one interception.

Over the same stretch, Lake Travis had team winning streaks of 48 and 25 games. The Cavaliers had also won 48 consecutive district games from 2004-2010.

Lake Travis does have three streaks still alive. The Cavaliers have not been blanked in a game since 2002. The Cavaliers have played in 130 games since the beginning of the 2003 season. Lake Travis has also won its last 30 playoff games, a state record. And of course there’s the related streak of five consecutive state championships. 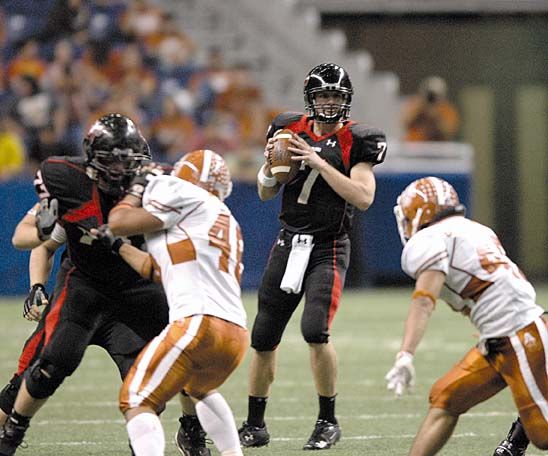