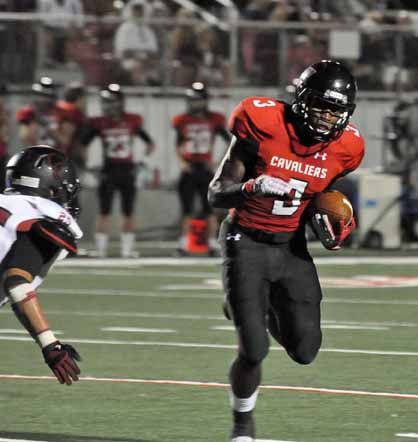 The Cavaliers, despite their big wins, haven’t gotten their running game fully untracked. Though junior Shaun Nixon may want to jump into a larger role in the offense – a role that Carter hopes he’ll embrace – the coach said the offensive staff won’t force Nixon and the running game.

“The way Coach [offensive coordinator David] Collins calls our offense and the way we distribute the ball, you won’t see someone get 30 carries,” Carter said. “We will get him touches other ways.”

Through two games Nixon has carried the ball just 18 times, but he’s averaged a gaudy 10 yards per carry, helped by an 87-yard touchdown run last Friday.

“That 87-yard touchdown run was about as impressive as they get,” Carter said. It earned Nixon the No. 4 spot on one national list of top plays.

To Carter’s, and Collins’ point, Nixon also has seven receptions for 123 yards (17 per catch), two kickoff returns (31 yards total) and a punt return (28 yards). All told, Nixon’s averaging 13 yards every time he touches the ball. They both expect that in closer games, Nixon will get more touches, and touches in open space.

“Right now our offense is playing three quarters [of the game],” Carter said. “We will put him in position to be successful.”

Following Friday night’s game, Nixon said the running game is still a work in progress. He understands that the Cavaliers will often pass to set up the run.

“We have a great quarterback and great receivers,” he said. “It takes time to develop the running game.”

Baker Mayfield, the quarterback, and the receiving corps led by Zach Austin, Preston Dupre and Tyler Payne, are doing more than their fair share of damage to opposing defenses. Through two games, Mayfield has thrown eight touchdown passes, five to Austin. Payne and Dupre caught their first touchdown passes Friday against Canyon, much to Carter's delight.

"Baker and Zach are still connecting, and Payne had a nice TD," he said.

On the season Mayfield has passed for 633 yards, completing 67.3 percent of his passes.

Canyon's game plan also cut into the Cavaliers' plan to run the ball. Operating at a snail's pace, Canyon ran the ball 46 times, eating up the clock if not gaining yardage. By contrast, Lake Travis' hi-octane offense snapped the ball just 34 times all night.

Still, Carter liked what he saw from the Cavaliers’ running attack, both Nixon and Zach Joiner, who scored a third-quarter touchdown on a short run.

“In the second half, we were much better,” he said. “I thought Shaun had a good game, as did Zach Joiner.”