Coaches hate to admit it when their team is about to face a vastly inferior team, but Lake Travis coach Hank Carter won’t lie to his team.

“They watch the film and can see,” he said Tuesday as his team prepares to take on Akins. The Eagles haven’t won a district game in three years and ended a 25-game losing streak earlier this year with an upset of Bastrop.

So coming off a four-week stretch where games have been decided by 10 points or less and in doubt until the final moments, how will the Cavaliers react knowing that Akins likely won’t provide the same test that Westwood, A&M Consolidated, Austin High and Bowie have? Carter expects that his team will give the same effort it has given to previous opponents and over previous years.

“We want to continue to play sharper,” he said. “There are things we do that have nothing to do with the opponent. Effort. Playing hard. Whether we’re playing Westlake or Akins, it shouldn’t matter.”

In practices, Lake Travis works more on what it needs to do get better at rather than what a specific opponent will try to do. This week will be no different, Carter said. Lake Travis has plenty to get better at, and like they did between games against Austin High and Bowie, he expects to see plenty of improvement by the time Friday’s game rolls around.

“It doesn’t matter who we play,” he said, recounting the mantra the team has developed over the years. “There is a switch that goes on when you are practicing or playing, and it needs to be on. I should be able to look at you during a rep and not be able to tell whether we’re up 50 points or down 50 points. The effort should be the same.”

Carter pointed to the two touchdowns the Cavaliers allowed against Bowie. While the Bulldogs executed the plays they called well, the Cavaliers didn’t provide the most resistance, the coach said.

“The film doesn’t lie,” he said. “We could tell on the first play that we had some guys not giving it their best effort.”

If Carter wasn’t pleased with the effort on Bowie’s first touchdown, he wasn’t any more thrilled on an assignment error. On a pitch play, Carter said two defenders went to the wrong gap and lost containment. Steve Johnson made them pay with a 59-yard scoring sprint.

The Cavaliers cleaned up their defensive mistakes and played much better in the second half, and Carter remains confident that he won’t see those particular mistakes again. Mistakes of youth, Carter called them.

“With young teams, they make young errors,” he said. “They won’t keep making those. Take the two plays Bowie scored on: they were defensive mistakes but I don’t think we will make those again. It’s just that we haven’t done this before.”

As Lake Travis entertains Akins and visits Anderson, Carter will look to see continued progress, like he did between the games against Austin High and Bowie.

“We’ve made some big strides, and in a month we will be a lot better than we are today,” he said on Tuesday, “whether it’s because we got our offensive line back or because the guys who are playing now have had the time to get better.”

The offensive line will be the key, because that group dictates how the offense can go. Carter will want to see that his makeshift unit continue to improve and gel, which in turn should help restore some offensive continuity that will allow Lake Travis to return to the break-neck pace at which it prefers to play. Last week Tanner Volpe became the fifth different offensive line starter to leave a game injured, joining Ryan Dolmanet, Hunter Siddons, Sean Peacock and Jake Adams. In their place have stepped Elliot de Laat, Garrett Stotts and Gus Crutcher. Drake Rowland is the lone Cavalier to start every game up front, and to accommodate Volpe’s loss last week, he shifted from guard to tackle.

He’ll want to see his defense continue to cut down on the fixable mistakes. And he wants to see the special teams get back up to speed, especially in the punt return game, where the Cavaliers have really struggled with the loss of receiver/punt returner Zach Austin.

In trying to replace Austin as the punt returner, Lake Travis fumbled three punts in two games, all at crucial times against A&M Consolidated and Austin High. Carter’s plan included moving linebacker Luke Hutton into the punt return role, but Hutton’s injury against A&M Consolidated delayed that move. He’s healthy now and will share punt return duties with Shaun Nixon, and while Carter wants to see the occasional big return, he’ll be happy with consistent fielding of punts.

“We need people who can go make a good decision and go catch the ball,” he said. “We’ve been blessed over the years with Zach, Cameron Wrinkle and even going back to Austin Pollard. Even though the ball may be in the air four seconds, you’ve really only got two seconds to see it and decide if you’re going to catch it, and then whether you’re going to fair catch it or return it. Luke and Shaun are our guys right now. Catching it is huge, but having a guy back there who can make an offensive play with the ball…”

With the way Lake Travis’s defense has played of late – allowing only one drive longer than 50 yards in the last two games – the punt return team figures to get some practice against the Eagles and Trojans.

“This is where we are,” Carter explained. “We’ve spent time working on not giving up the big play in special teams. Now we are trying to fine-tune it and attack with our special teams. We’re doing better.”

Better. It’s what Carter hopes to see all around as his team works toward another playoff run. 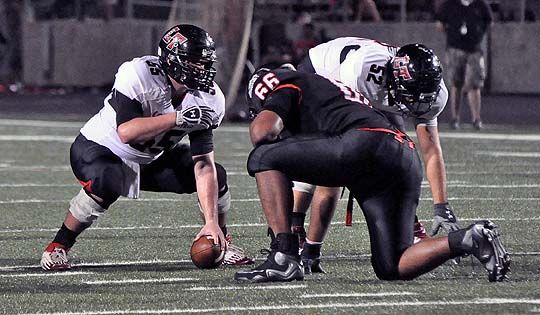