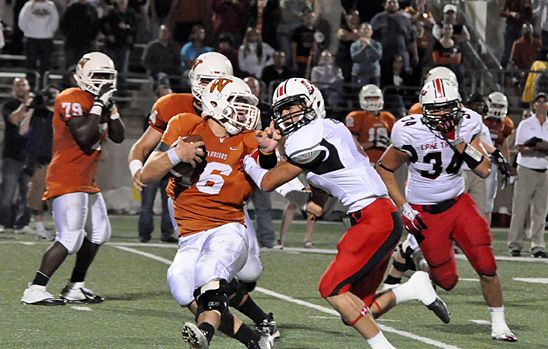 Top-ranked Lake Travis got the test it wanted and then some Friday night against Westwood.

The Cavaliers rallied from a 24-16 deficit to escape with a 28-24 win. Baker Mayfield drove the Cavaliers 77 yards in 3:33, converting a crucial fourth down along the way. His touchdown pass to Shaun Nixon with 2:24 left capped the drive and gave the Cavaliers the lead.

Lake Travis’ defense then clinched the win. With former freshman teammate Bear Fenimore needing to drive his Warriors the length of the field, Lake Travis’ defense came up with a pair of sacks in the final minute. After Fenimore had converted a fourth down with a burst to the Westwood 41, Zach Davies brought him down for a seven yard loss, and after an incompletion, Cody Reichle dropped him for a 14-yard loss on third down. The Warriors tried a hook-and-lateral on fourth down, but Vince Villagomez pulled down Ty Marshall well short of the first down, and the Cavaliers escaped.

“We just wanted our offense to score and give us a chance,” Davies said after the game. “We just did what we’d done the entire second half. We had momentum and were playing with some crazy intensity.”

While the Cavaliers escaped with the win, they could not escape without several injuries, including one that could be severe. On the drive that led to the winning touchdown, leading receiver Zach Austin crumbled to the turf untouched after taking a short pass from Mayfield and trying to make a cut along the sideline. After the game, Austin – who had seven catches for 124 yards and two scores – left the field on crutches with his right knee in a brace.

“We don’t know the severity of the injury,” head coach Hank Carter said immediately following the game, “but it looked pretty bad. [If it is] We can’t replace him, but someone will step up. That’s what always has happened at Lake Travis.”

When Austin went down, Nixon stepped up. Aside from center Ryan Dolmanet and quarterback Mayfield, Nixon was the only Cavalier who touched the ball on the team’s final eight plays. He caught three passes and rushed twice more. Three of his final touches resulted in key conversions to keep Lake Travis moving. He hauled in a Mayfield pass for 14 yards to convert a crucial fourth-and-three. On third-and-five he rushed for 13 yards to get the Cavaliers within field goal range. And the touchdown catch came on third-and-10.

“I felt pretty good when we got to the 20 [after Nixon’s run] because we have confidence in [kicker] Kevin [Marcotte],” Carter said. “But I was glad that we punched it in.”

Nixon, who caught 10 passes for 122 yards and rushed 13 times for 68 yards, opened the scoring early. He got behind the defense when Mayfield scrambled on Lake Travis’ first play and hauled in a 53-yard pass for a score. It marked the third time in as many games that Lake Travis scored on its first play from scrimmage.

Lake Travis led 16-0 after Marcotte made a 21-yard field goal and Austin wrestled the ball away from Sean Hoeferkamp for a 49-yard score.

Westwood climbed back into the game with a methodical 70 yard march that lasted 11 plays, the last a 15-yard pitch from Fenimore to Ty Marshall. When Nixon lost a fumble on the next play, Westwood seized momentum, and the Cavaliers seemed out of sorts the rest of the half and into the third quarter.

While the Cavaliers tried to find themselves, Westwood took advantage. The fumble turned into a short field goal from Colin McGuire. When the Warriors sacked Mayfield on fourth down one play after he tweaked an ankle, they proceeded to march 62 yards in 13 plays to take a 17-16 lead just 17 seconds before halftime. A late hit against the Cavaliers kept the drive alive.

After halftime, the Cavaliers suffered another gaffe. Mayfield tried to throw back across the field as he eluded pressure, but his toss toward Nixon was ruled a lateral, and when Brandon Brown picked it up and walked into the end zone, Westwood led 24-16 just 51 seconds into the third quarter.

The Cavaliers regrouped thanks in large part to their defense, which found itself after allowing Westwood 173 yards of offense in the first half. After halftime, Lake Travis’ defense allowed only three first downs and forced Westwood’s first five possessions.

“That was a case of Coach Carter getting out of the way,” the head coach said after the game. “I did a terrible job calling the defense in the first half. The kids were great in the second half, and we got some pressure on him there at the end.”

Lake Travis meanwhile, began to click. Mayfield drove the Cavaliers 58 yards in just five plays, shaking off a holding penalty along the way to find Austin behind the defense for a 26-yard score to bring Lake Travis within 24-22.

The Cavaliers held on to win their 25th consecutive game. They will host A&M Consolidated, a winner over Westlake Friday, next week.