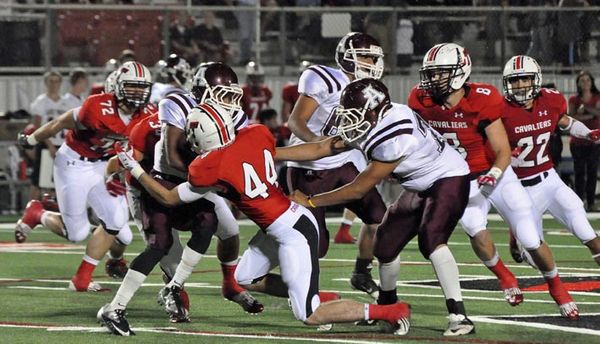 If he enjoyed the Bill Murray comedy “Groundhog Day” before this football season, Lake Travis head coach Hank Carter won’t say. But judging from the way the season has unfolded so far, it’s a safe bet to assume he isn’t a fan any more. Carter can more than relate to what Murray’s beleaguered character, meteorologist Phil Connors, felt as he kept waking up to deliver a live forecast from Punxsutawney, Penn., home of the famous groundhog.

For at least the last five weeks and probably going back to last spring, Carter’s been reliving – and maybe surpassing -- the toughest, most frustrating year he’s experienced at Lake Travis.

When Carter took over the program from his mentor Chad Morris in 2010, he inherited a team that returned among other key pieces its quarterback, top receiver and most experienced linemen. Then, in successive weeks, he watched with growing disbelief as that receiver (Connor Floyd), quarterback (Michael Brewer) and one of his linemen (Casey Laney) suffered injuries that, while not season-ending, kept them out of the lineup for significant chunks of the season.

So what the Cavaliers are going through this year, where seemingly not a week goes by where a key player doesn’t miss time or an entire game, should be old hat.

Going back to the spring, the Cavaliers have suffered more than their share of injuries. More than half of the projected starting offensive line has missed time this year and two haven’t even suited up for a game. Wide receiver Zach Austin, in the midst of an all-state type of season, ruptured his ACL at the end of the third game and is lost for the season. Defensively, Spencer Staples tore his ACL in the team’s lone scrimmage. Michael Islava, Hagen Patterson, Luke Hutton – all key components – have missed or will miss games while they recover from various bumps and bruises.

“It feels a lot like 2010,” Carter said earlier this week. “We should be good at dealing with this stuff now.”

Dealing with it and accepting it are two entirely different things.

“It’s not fun right now,” he admitted. “It’s more frustrating than anything.”

That admission came as the Cavaliers prepared to open District 15-5A play against Austin High on Sept. 28. In that rain-soaked, lightning-delayed, hard-fought 14-7 win, Lake Travis saw another handful of players get injured, including the two key cogs of the offense – quarterback Baker Mayfield and running back Shaun Nixon. While Mayfield returned and played through a thigh bruise and Nixon’s injury came late in the game, the most frustrating turn of events came when Staples, returning to action despite the torn ACL, appeared to reinjure his knee and left in obvious excruciating pain. On Tuesday, Carter confirmed the worse, that Staples would indeed miss the rest of the season.

For those with less serious injuries – what those in the game call “nagging” – the responsibility remains the same. The leaders – including Nixon and Mayfield – must buck up and play through the pain.

“Both of those guys will be okay,” Carter said of their knicks and scrapes suffered against Austin High. “They are a little wounded but they’ll play. We don’t really have a choice [in that].”

While injuries have robbed the Cavaliers of individual games or, in the case of Austin and Staples entire seasons, Carter remains confident that despite the injuries and the losses, his team has what it takes to stay in the championship hunt.

“You hate losing Austin, but we still have plenty of weapons,” he said last week. “We have what it takes.”

“We’ve had to use seven or eight sophomores already,” Carter said. “Brewer played the entire game at MIKE backer and played well. Pearson and [junior David] Mackie played a lot. [Grant] Foster played most of the game. [Garrett] Stotts played the whole game at center.”

Carter had hoped to let his talented sophomores get a bit more experience playing on Thursday nights, but now that they’ve had to step and play on Fridays, he must be patient as the young players adjust to the faster pace and bigger opponents.

“We need games and practices under our belts,” he said. “The younger kids just need to play so they can get the confidence that comes with experience. Right now, a lot of our more experienced players are out.”

And as long as the younger players need time to mature, Carter said the onus will fall on those healthy, more experienced players to continue to do their part.

“We need our most experienced guys to play better,” he said. “We ask a lot of every player, but we ask the most of our most talented and experienced players.”

While he may not want to lean on his younger players today, Carter realizes he must. He also realizes that will have benefits down the road as he gets to see part of Lake Travis’ future mature in the present.

“Our future looks very bright,” he said, “but they have to grow up faster than we may have wanted them to.”

And that may end up being a good thing, because while he feels stuck in the frustrations of 2010, Carter can surely take solace in the fact that the Cavaliers indeed got healthy and ended up winning the fourth of their five consecutive state championships.