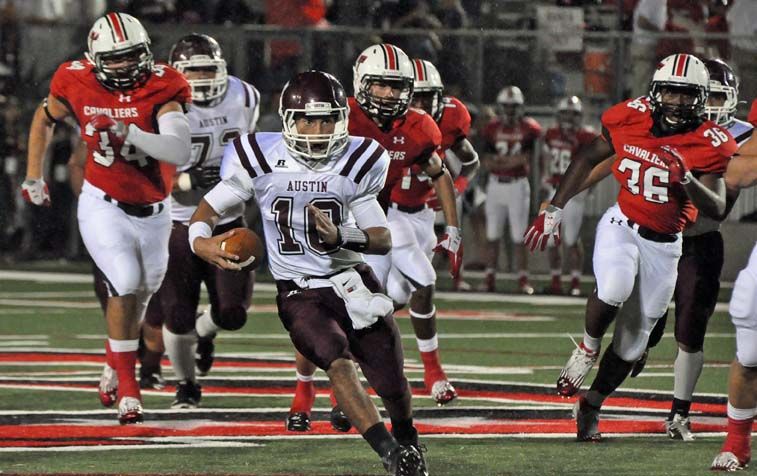 Lake Travis’ performance Friday night wasn’t pretty and it wasn’t all that effective. In fact, about the only bright spot on a wet, delayed, Homecoming evening turned out to be the score.

Lake Travis did just enough to defeat Austin High 14-7 to win the District 15-5A opener for both teams.

The Cavaliers suffered their usual rash of injuries. They lost senior defensive tackle Spencer Staples for the season as he made his first appearance following a knee injury and saw quarterback Baker Mayfield and running back Shaun Nixon leave with less serious injuries but return.

Austin High led 7-0 in the second quarter when Lake Travis suffered the first of four special teams miscues on the night. The Maroons blocked a punt that they turned into a touchdown, putting the Cavaliers on their heels.

They responded in spite of Mayfield having to miss most of the second quarter after suffering a bruised leg. Nic Medina came in and led the Cavaliers on a tying drive, even throwing a key block on Nixon’s 23-yard touchdown run that tied the score.

In the second half, the Cavaliers’ special teams continued to let them down. They muffed a punt for a fumble, missed a field goal attempt and allowed Austin High to convert a fake punt for a first down. Thanks to a lock-down defensive effort, though, the Maroons couldn’t turn any of those gifts into points, and when Mayfield connected with Tyler Payne for a touchdown in the fourth quarter, the Cavaliers escaped with the win.

“Defensively, outside of three alignment mistakes, we were very good,” Carter said. “We never could relax, and that’s a playoff-type of atmosphere. We went and challenged them that they couldn’t allow any points. We’re a little disappointed we didn’t hold them to a field goal after the blocked punt, but…”

Luke Hutton, who missed the second half of the 30-28 loss to Austin High, returned and led the defensive effort with 14 tackles. Connor Shannon contributed 12 tackles from his defensive end spot, including two in the backfield. James Bailey made nine tackles and recovered a fumble. Brock Kenyon, who earned Homecoming King honors at halftime, made eight tackles, intercepted a pass and knocked down four others. And John Brewer, just up from the junior varsity, started for injured Hagen Patterson and made seven tackles.

Offensively, the Cavaliers continued to struggle as another makeshift offensive line took the field in front of Mayfield and Nixon. Sophomore Garrett Stotts joined the group and played the duration at center.

Mayfield completed 11 of 17 passes for 113 yards and the score to Payne, who had three catches for 67 yards. Medina completed a pair of passes for 52 more yards. Nixon led the offense with 83 yards rushing on 15 carries and five receptions for 37 yards.