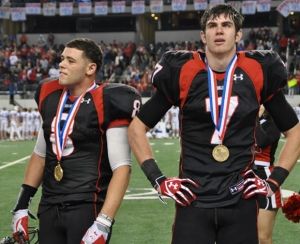 The clock approaches midnight on an otherwise non-descript December Friday in Texas.

But this isn’t any ordinary Friday night. It is Texas State Football Championship Friday, and an entire community has happily endured the three-hour journey from the shores of Lake Travis, outside Austin, to Cowboys Stadium in Arlington, this spaceship of a football stadium, a monument to the sport that matters most in this corner of the country.

They stand as one under the glow of the brightest lights and famous Jumbotron and continue cheering as they have since kickoff occurred nearly four hours ago. They haven’t just witnessed a state championship football game between their beloved Cavaliers and the Panthers from Midway High School, just outside Waco. They’ve witnessed Texas high school football history, and not just any Texas high school football history. With their hard-fought, well-earned 22-7 win, the Lake Travis Cavaliers – only nine seasons removed from a disastrous 0-10 campaign – become the first team in Texas history to win five consecutive state championships. Their 30 consecutive playoff wins also set a state record. This spaceship monument hadn’t even been built when the drive to five titles began. The moment will live on for years to come, perhaps because there will never be another like it.